"North By Northwest" Is Released

The screenplay was written by Ernest Lehman, who wanted to write "the Hitchcock picture to end all Hitchcock pictures". Author Nick Clooney praised Lehman's original story and sophisticated dialogue, calling the film "certainly Alfred Hitchcock's most stylish thriller, if not his best". The film is one of several Hitchcock movies with a film score by Bernard Herrmann and features a memorable opening title sequence by graphic designer Saul Bass. This film is generally cited as the first to feature extended use of kinetic typography in its opening credits.

The movie's world premiere took place at the San Sebastian International Film Festival. North by Northwest is a tale of mistaken identity, with an innocent man pursued across the United States by agents of a mysterious organization who want to stop his interference in their plans to smuggle out microfilm containing government secrets (a classic MacGuffin).

While having lunch at the Plaza Hotel in New York, advertising executive Roger O. Thornhill (Cary Grant) has the bad luck to call for a messenger just as a page goes out for a "George Kaplan." From that moment, Thornhill finds that he has stepped into a nightmare -- he is quietly abducted by a pair of armed men out of the hotel's famous Oak Room and transported to a Long Island estate; there, he is interrogated by a mysterious man (James Mason) who, believing that Roger is George Kaplan, demands to know what he knows about his business and how he has come to acquire this knowledge. Roger, who knows nothing about who any of these people are, can do nothing but deny that he is Kaplan or that he knows what they're talking about. Finally, his captors force a bottle of bourbon into Roger and put him behind the wheel of a car on a dangerous downhill stretch. Through sheer luck and the intervention of a police patrol car and its driver (John Beradino), Roger survives the ride and evades his captors, and is booked for drunk driving. He's unable to persuade the court, the county detectives, or even his own mother (Jesse Royce Landis) of the truth of his story, however -- Thornhill returns with them to the mansion where he was held, only to find any incriminating evidence cleaned up and to learn that the owner of the house is a diplomat, Lester Townsend (Philip Ober), assigned to the United Nations. He backtracks to the hotel to find the room of the real George Kaplan, only to discover that no one at the hotel has ever actually seen the man. With his kidnappers once again pursuing him, Thornhill decides to confront Townsend at the United Nations, only to discover that he knows nothing of the events on Long Island, or his house being occupied -- but before he can learn more, Townsend gets a knife in his back in full view of 50 witnesses who believe that Roger did it. Now on the run from a murder charge, complete with a photograph of him holding the weapon plastered on the front page of every newspaper in the country, Thornhill tries to escape via train -- there he meets the cooly beautiful Eve Kendall (Eva Marie Saint), who twice hides him from the police, once spontaneously and a second time in a more calculated rendezvous in her compartment that gets the two of them together romantically, at least for the night. By the next day, he's off following a clue to a remote rural highway, where he is attacked by an armed crop-dusting plane, one of the most famous scenes in Hitchcock's entire film output. Thornhill barely survives, but he does manage to learn that his mysterious tormentor/interrogator is named Phillip Vandamm, and that he goes under the cover of being an art dealer and importer/exporter, and that Eve is in bed with him in every sense of the phrase -- or is she? ~ Bruce Eder, All Movie Guide 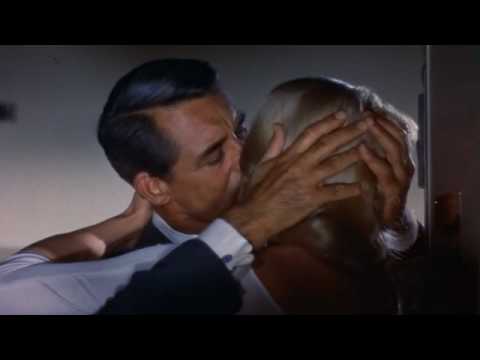