Brazil won the World Cup by defeating Sweden, and thus won the trophy for the first time.

Sweden took the lead after only 4 minutes after an excellent finish by captain Liedholm. The lead didn't last long however as Vavá equalised just 5 minutes later. On 32 minutes, Vavá scored a similar goal to his first to give Brazil a lead 2–1 at the break. 10 minutes into the second half, Brazil went further in front thanks to a brilliant goal scored by Pelé. He took control of the ball inside the penalty area, chipped the ball over the defender then smashed it past a helpless Kalle Svensson. Halfway through the second half Brazil went 4-1 up with a goal scored by Mário Zagallo. Simonsson pulled one back for Sweden with 10 minutes remaining but it was far too late. Pelé sealed the 5–2 win with a header in injury time and Brazil were able to celebrate their first World Cup title.

The 1958 final holds the record for most goals scored in a World Cup Final, and it shares the record for the greatest winning margin (with the 1970 and 1998 tournaments).

The privilege of hosting the tournament was given to Sweden, which withdrew in 1954, giving way to Switzerland. Argentina joined the competition after a long break, not having been in the finals since 1938. For the first time the USSR team entered the competition. There was already a surprise in the qualifiers: the elimination of two-time world champions from the first 4 tournaments, Uruguay and Italy. The Welsh team, after some bad performance in the qualifiers was selected opponent for Israel, which was boycotted in its qualifiers zone, and made the finals (beating Israel 2:0). 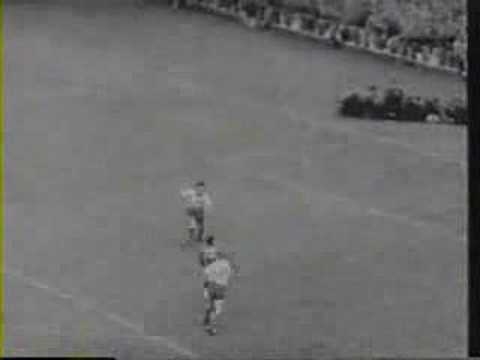