The last years of the pontificate of Pius XII began in late 1954 with a long illness, during which he considered abdication.

Afterwards, changes in his work habit became noticeable. The Pope avoided long ceremonies, canonizations and consistories and displayed hesitancy in personnel matters. During the last years of the pontificate, Pius XII procrastinated personnel decisions within his Vatican, and found it increasingly difficult to chastise subordinates and appointees such as Riccardo Galeazzi-Lisi, who, after numerous indiscretions was excluded from Papal service for the last years, but, keeping his title, was able to enter the papal apartments to make photos of the dying Pope, which he sold to French magazines.
Pius XII often elevated young priests as bishops, such as Julius Döpfner (35 years) and Karol Wojtyla (38 years), one of his last appointees in 1958. He took a firm stand against pastoral experiments, such as "worker-priests", who worked full time in factories and joined political parties and unions. He continued to defend the theological tradition of Thomism as worthy of continued reform, and as superior to modern trends such as phenomenology or existentialism.

Since his 1954 illness, Pope Pius addressed lay people and groups about an unprecedented range of topics. Frequently, he spoke to members of scientific congresses, explaining Christian teachings in light of most recent scientific results. Sometimes he answered specific moral questions, which were addressed to him. To professional associations he explained specific occupational ethics in light of Church teachings. Pius granted the Honor of Being the "Catholic University of The Philippines" to the University of Santo Tomas in Manila, the oldest existing in Asia.
Before 1955, Pacelli worked for many years with Giovanni Battista Montini. The Pope did not have a full time assistant. Robert Leiber helped him occasionally with his speeches and publications. Augustin Bea was his personal confessor. Madre Pascalina Lehnert was for forty years his housekeeper and assistant. Domenico Tardini was probably closest to him.
Pius XII died on 9 October 1958 of acute heart failure brought on by a sudden myocardial infarction in Castel Gandolfo, the Papal summer residence. His doctor Gaspanini said afterwards: "The Holy Father did not die because of any specific illness. He was completely exhausted. He was overworked beyond limit. His heart was healthy, his lungs were good. He could have lived another 20 years, had he spared himself."

Pius XII's doctor, Riccardo Galeazzi-Lisi, reported that the Pontiff's body was embalmed in the room where he died using a novel process invented by Dr. Oreste Nuzzi.
Unlike all popes before him, Pope Pius XII did not want the vital organs removed from his body, demanding instead, that it be kept in the same condition, "in which God created it". According to Galeazzi-Lisi, this was the reason why he and Professor Oreste Nuzzi, an embalmer from Naples, used a novel embalming approach invented by Nuzzi.
In a controversial press conference, Galeazzi-Lisi described in great detail the embalming the body of the late Pontiff. He claimed to have used the same system of oils and resins, with which the body of Jesus Christ was preserved. Galeazzi-Lisi asserted that the new process would "preserve the body indefinitely in its natural state" However, whatever chance the new embalming process of efficaciously preserving the body was obliterated by intense heat in Castel Gandolfo during the embalming process. As a result, the body decomposed rapidly and the viewing of the faithful had to be terminated abruptly.
Galeazzi-Lisi reported that heat in the halls, where the body of the late Pope lay in state, caused chemical reactions which required it to be treated twice after the original preparation. Swiss Guards stationed around Pius XII's body were reported to become ill during their vigil.

His funeral procession into Rome was the largest congregation of Romans as of that date. Romans mourned "their" Pope, who was born in their city, especially as hero in time of war. Cardinal Angelo Roncalli (John XXIII) wrote in his diary on 11 October that probably no Roman emperor had enjoyed such a triumph, which he viewed as a reflection of the spiritual majesty and religious dignity of Pius XII

Throughout his papacy. Pope Pius XII was almost universally, regarded as a saintly man, a scholar, a man of peace, a tower of strength, and a compassionate defender and protector of all victims of the war and genocide that had drenched Europe in blood. At the end of the war Western nations paid tribute to his efforts on behalf of the oppressed. When Pius XII died, Jews praised him for his help and were among the first to express sorrow and gratitude for his solicitude during the Holocaust.

Documentary evidence and the testimony of his contemporaries prove that Pius XII was a committed defender and protector of the victims of war and hatred which drenched Europe in blood. Pius XII ordered the Congregation of the Holy Office to issue a formal and explicit condemnation of the mass murder going on in Germany in the name of improving the race. The decree was published on December 6, 1940, in L'Osservatore Romano. At the end of World War II, western nations paid tribute to Pius XII's efforts on behalf of the oppressed. When he died in 1958, the Jewish communities of Europe praised him for his help and expressed sorrow and gratitude for his solicitude during the Holocaust. In the 1960s, there began a campaign of vilification against Pius XII. Today, his detractors continue to claim that he lacked courage, human compassion and a sense of moral rectitude. Hostile attacks by the media replace the historical record that showed him as a great leader.

Immediately after his death, the world at large proclaimed Pope Pius XII worthy of the title, Saint. Referring to Pius XII's sanctity in his letter to Margherita Marchione (February 22, 2001), Bernard Tiffany quoted the following letter from Padre Pio's secretary, Reverend Dominic Meyer, OFM, Cap.: "Padre Pio told me he saw the Pope in Heaven during his Mass. And many miracles have been attributed to His intercession in various parts of the world. Pictures of the Pope have been printed with a prayer for His beatification. But so far I have not seen any with the prayer in English (June 30, 1959)."

In his Diario, one finds a confirmation of the above statement. When Pius XII died on October 9, 1958, Padre Pio was consoled "by a vision of the former pontiff in his heavenly home," according to Padre Agostino. A more recent confirmation of this event comes from Pius XII's niece, Marchesina Elena Rossignani Pacelli, to whom Padre Pio repeated the same words. On May 19, 2002, Elena Pacelli confirmed this statement. 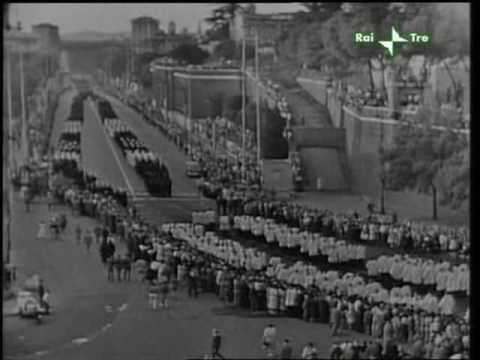