The Seagram Building is a skyscraper, located at 375 Park Avenue, between 52nd Street and 53rd Street in Midtown Manhattan, New York City.

It was designed by Ludwig Mies van der Rohe, in collaboration with Philip Johnson. Severud Associates were the structural engineering consultants. The building stands 516 feet tall with 38 stories, and was completed in 1958. It stands as one of the finest examples of the functionalist aesthetic and a masterpiece of corporate modernism. It was designed as the headquarters for the Canadian distillers Joseph E. Seagram's & Sons with the active interest of Phyllis Lambert, the daughter of Samuel Bronfman, Seagram's CEO.

This structure, and the International Style in which it was built, had enormous influences on American architecture. One of the style's characteristic traits was to express or articulate the structure of buildings externally. It was a style that argued that the functional utility of the building’s structural elements when made visible, could supplant a formal decorative articulation; and more honestly converse with the public, than any system of applied ornamentation. A building's structural elements should be visible, Mies thought. The Seagram Building, like virtually all large buildings of the time, was built of a steel frame, from which non-structural glass walls were hung. Mies would have preferred the steel frame to be visible to all; however, American building codes required that all structural steel be covered in a fireproof material, usually concrete, because improperly protected steel columns or beams may soften and fail in confined fires.[2] Concrete hid the structure of the building — something Mies wanted to avoid at all costs — so Mies used non-structural bronze-toned I-beams to suggest structure instead. These are visible from the outside of the building, and run vertically, like mullions, surrounding the large glass windows. Now, observers look up and see a "fake and tinted-bronze" structure covering a real steel structure. This method of construction using an interior reinforced concrete shell to support a larger non-structural edifice has since become commonplace. As designed, the building used 1,500 tons of bronze in its construction.

On completion, the construction costs of Seagram made it the world's most expensive skyscraper at the time, due to the use of expensive quality materials and lavish interior decoration including bronze, travertine, and marble. The interior was designed to assure cohesion with the external features, repeated in the glass and bronze furnishings and decorative scheme.

Another interesting feature of the Seagram Building is the window blinds. As was common with International Style architects, Mies wanted the building to have a uniform appearance. One aspect of a façade which Mies disliked, was the disordered irregularity when window blinds are drawn. Inevitably, people using different windows will draw blinds to different heights, making the building appear disorganized. To reduce this disproportionate appearance, Mies specified window blinds which only operated in three positions – fully open, halfway open/closed, or fully closed.

The fame of the Lever House in the 1950s was matched by the Seagram Building in the 1960s. This steel skeleton framed skyscraper, headquarters of the Seagram Liquor Company, established the basic form of the corporate tower for years to come. Like Lever House, the curtain wall tower is not built to the edge of the site. It occupies only 40 percent of the allowable zoning envelope, freeing up space for a granite-paved public plaza enhanced by two reflecting pools and marble benches that is widely regarded as one of the most successful in the city. The plaza is an expensive aesthetic and symbolic gesture, especially significant in the dense urban environment which surrounds it.

Designed by a famous European architect who immigrated to the United States at the beginning of World War II, this building epitomizes the importation of modernist ideals from Europe to the United States. In its monumental simplicity, expressed structural frame and rational use of repeated building elements, the building embodies Ludwig Mies van der Rohe's oft-repeated aphorisms that "structure is spiritual" and "less is more." He believed that the more a building was pared to its essential structural and functional elements, and the less superfluous imagery is used, the more a building expresses its structure and form.

Following these premises, the Seagram Building is meant to confirm Mies' assertion that when modern industrialized building technology is truthfully expressed, architecture becomes transcendent. Ironically, the luxurious materials used (marble for the plaza benches, travertine for the lobby walls and floor, tinted glass and bronze for the curtain wall) and the carefully controlled customized details that pervade the building remind the viewer that this building is far from being the simple result of rationalized industrial production and construction techniques. Additionally, Mies' selective exposure of the function or non-function of various architectural elements is based on illusionism. The building is, in a sense, a structural fiction rather then an honest expression. 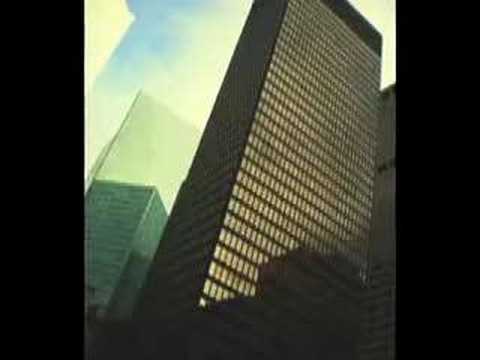