Unlike most of Marilyn Monroe's movies, Bus Stop is neither a full-fledged comedy nor a musical, but rather a dramatic piece. Monroe does however sing one song: "That Old Black Magic" (by Harold Arlen and Johnny Mercer). Bus Stop was based on two plays by William Inge, People in the Wind and Bus Stop. The inspiration for the play Bus Stop came from people Inge met in Tonganoxie, Kansas.

In the 1961-62 season, ABC adapted the play and film into a television series of the same name, Bus Stop starring Marilyn Maxwell as the owner of the bus station and diner. In the segment "Cherie" which most closely follows the film, Tuesday Weld performed the role of Marilyn Monroe, and Gary Lockwood appeared as the Don Murray character.

The film was shot in Idaho and Arizona.

In this cinemadaptation of William Inge's Broadway comedy Bus Stop, Marilyn Monroe is cast as Cherie, a fifth-rate nightclub chanteuse who captures the heart of Montana rodeo champ Bo (Don Murray). He, in turn, kidnaps Cherie and bundles her off to the roadside bus stop of the title. Gradually, the headstrong Bo learns that you can't rope a gal the same way you lasso a steer, but before this happens his face is rearranged by gallant bus driver Carl (Robert Bray). By this time, however, Cherie has fallen in love with her impulsive but basically good-hearted abductor. Others in the cast include Arthur O'Connell as Bo's level-headed travelling companion and "protector" Virgil, Betty Field as down-to-earth bus stop proprietress Grace, and Eileen Heckart as Cherie's confidante Vera. The film later inspired a 1961 TV series. A few TV prints of Bus Stop still exist bearing the alternate title Wrong Kind of Girl. ~ Hal Erickson, All Movie Guide 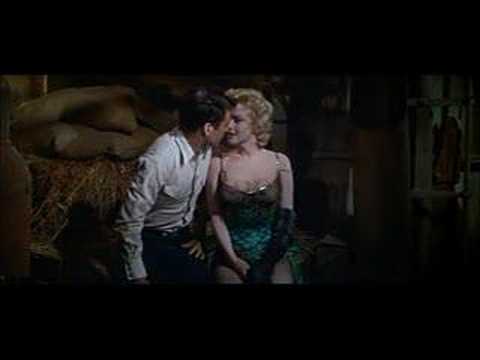