In October 1956, they were passengers aboard a commercial aircraft that also lost two engines, forcing the pilot to land on open water - in their case, the Pacific Ocean.

Like the 155 passengers and crew of the US Airways jetliner piloted by Sullenberger, the survival of the 31 people aboard Pan American World Airways Flight 943 became an international tale of good fortune. And they, too, credited their crew and a Bay Area pilot - Capt. Richard Ogg - with nerves of steel for their survival.

"Our captain was a pillar of strength," said Jane Gordon, 86, Maureen's mother, speaking by phone from her home in Maryland. "He was just wonderful. I'm sure he was scared to death, but you'd never know it."

Now it was daylight. At 8:04 a.m. Ogg announced: ten minutes. Then, one minute. The passengers braced. Ogg carefully aimed the big Boeing Stratocruiser for a strip of white fire-fighting foam that Pontchartrain had laid to aid the pilot's depth perception. He kissed the plane onto the hard waves, touching gently at first. Then it bounced hard, whipped around violently as an engine tore loose, snapped in two. Quickly the crew discharged and inflated the life rafts. The passengers waded cautiously through the cabin rubble, hopped into the rafts. Within ten minutes after the Stratocruiser struck water Pontchar train's small boats had picked up all survivors-only five were slightly injured-and deposited them, snuggled into blankets, aboard the cutter. Eleven minutes later, what was left of the Stratocruiser disappeared in the foam.

Despite these problems the crew managed to maintain altitude at 5000 feet at an airspeed of 135 knots. Remaining fuel was insufficient however to reach San Francisco or fly back to Honolulu. The crew decided to orbit the cutter 'November' and wait for daylight to carry out the ditching. Meanwhile electric water lights were laid by the cutter to illuminate a track for the aircraft. At 02:45 the no. 4 engine backfired and failed. The prop was feathered. At 05:40 the captain contacted the cutter again about the intended ditching time and descended to 900 feet. The ditching was carried out at 06:15 with full flaps, gear up and at a speed of 90 knots. The fuselage broke off aft of the main cabin door. The tail section swung to the left, trapping the liferaft launched from the main cabin door. Some 3 minutes after all occupants had been rescued, at 06:32 the aircraft sank at position 30deg01.5'N, 140deg09'W.

At 0540, Captain Ogg notified Pontchartrain that he was preparing to ditch. The cutter laid out a foam path for a best ditch heading of 315 degrees, to aid the captain's vision of his actual height above the water. After a dry run, the plane touched down at 0615, at 90 knots with full flaps and landing gear retracted, in sight of the Pontchartrain, at 30°01.5'N. 140°09'W.

One wing impacted a swell, causing the plane to rotate, inflicting damage to the nose section and breaking off the tail. Nevertheless, all 31 on board survived the ditching. Three life rafts were deployed by the crew and passengers that had been previously assigned to help. One life raft failed to inflate properly, but rescue boats from the cutter were able to promptly transfer the passengers from that raft. All were rescued by the Coast Guard before the last pieces of wreckage sank, at 0635. 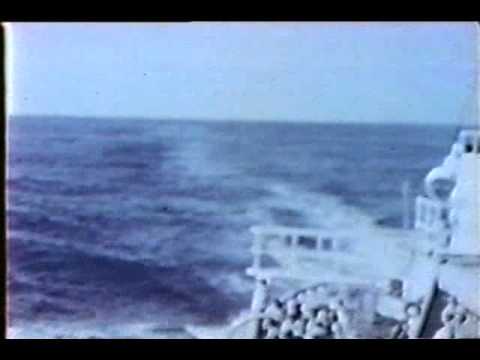