The Mercedes-Benz 190SL was a two door grand touring convertible with a removable hardtop.

It was produced by Mercedes-Benz between May 1955 and February 1963. A prototype was first shown at the New York Auto Show of 1954.
The 190SL was sold alongside the faster, more expensive Mercedes-Benz 300SL, which it closely resembled both in its styling and in its fully independent suspension, with both cars having double wishbone suspensions at the front and swing axles at the rear. However, the 190SL did not use the 300SL's purpose-built tubular spaceframe W198 platform, but was instead built on the shortened monocoque R121 platform, which was modified from the W121 small saloon platform.
The 190SL was powered by a completely new, slightly oversquare 1.9L straight-four SOHC engine (Type M121 BII), that developed 105 PS (77 kW; 104 hp) (or 120 gross hp) that earned itself a reputation for not running that smoothly mostly due to the difficulty in properly synchronising the twin-choke dual Solex carburetors, and that, in detuned form, was later also used in the W120 180 and W121 190 models. In fact, the four cylinder engine block of the 190SL was based on the six cylinder engine of the 300 SL. The 85 mm bore was transferred unchanged from the larger engine to the smaller, although the stroke for the 190 SL was reduced from 88.0 mm to 83.6 mm.
The car was available either as a soft-top convertible (initially priced at DM 16,500/$ 3,998) or with removable hardtop (DM 17,650/$ 4,295). A nice option to be had was the third-passenger transversal seat that could even fit an adult. In its early life, the 190SL could also be had as a sports-racing model with small perspex windscreen and aluminum doors. In 1959, the hardtop's rear window was enlarged.
The 190SL was also referred to as the Nitribitt-Mercedes after the scandal surrounding the murder of the call girl Rosemarie Nitribitt, who owned a 190SL.
Both the 190SL and the 300SL were replaced by the Mercedes-Benz 230SL in 1963.

There's no doubt that Fritz Nallinger and his team held no illusions about the 190SL's lack of performance, which led to 1950s Mercedes-Benz 190SL development. Even though many critical comments were ill-informed, they must have irked engineers like Hans Scherenberg and Karl-Heinz Goschel.

Nonetheless, the corporate parts bin contained sufficient goodies for some potentially exciting alternatives to be built and tested during the mid-1950s.

It was in the engine department where the 190SL was lacking most in their opinion. (The four-cylinder engine was jokingly referred to by the engineers as the Rappelkönig, or "rattle king.") In January 1954, Scherenberg and Goschel were asked to look at new developments.

Goschel, the fuel injection specialist responsible for the 300SL's system, decided to apply some of the technology from the M198 engine to the 190SL. A new engine designation -- M126 -- was given to this research. A completely new cylinder head casting was produced with crossflow porting. High-pressure Bosch mechanical fuel injection and desmodromic valve gear were adapted from the M198 powerplant.

A further three cars (190SL/6, -8, and -9) were commissioned and tested, car nine eventually covering some 41,500 kilometers (more than 25,750 miles). However, the engine proved to be no more sophisticated than the production M121 unit, was only marginally more powerful, and would have been far more expensive to produce.

Rudolf Uhlenhaut, a man who loved fast and powerful cars -- he had a very special 300SLR built for his private use -- had some ideas on improving the 190SL. His solution was simple: Power the 190SL with a 3.0-liter six-cylinder engine from the 300 series.

The task of modifying the 190SL was given to Kurt Oblander, a recent recruit to Mercedes-Benz. The W121 engine bay was not designed for an engine as physically large as the 300's six, so Oblander built a parts-bin engine. To the 300SL block that he canted at 50 degrees, he took an M198 cylinder head and fitted it with three Solex 32 PAIAT carburetors (the injection system was too bulky), added an air filter from the 300Sc, and fabricated a new intake manifold, sump pan, water pump, and exhaust system.

Initial power output was 139 bhp, but this was quickly raised to 151 horsepower at 5,100 rpm. The engine was squeezed into prototype 190SL/3 and entered in the 1956 Alpine Rally. Its power and acceleration were far superior to that of the standard 190SL, although weight distribution was inferior, but again the costs of production were prohibitive. Another blind alley.

By far, the most exciting avenue of development was that christened W127, in which the engineers fitted the M180 2.2-liter six-cylinder engine that was a prototype from Goschel's fuel injection test program. Using a touring specification camshaft, it produced an easy 117 bhp and had better torque characteristics than the carbureted version of the same engine.

Body modifications were necessary to fit the longer six in the 190SL's engine bay. The prototype department remodeled the engine bulkhead with a special six-inch recess.

The strength of the transmission tunnel was increased by using one from the W104 that had thicker metal and added gussets around the rear of the passenger compartment.

The six-cylinder engine and a four-speed gearbox were assembled onto the production subframe, which was in turn bolted up to the W121 bodyshell as usual. The first prototype used by Erich Waxenberger in this program was car 190SL/4, followed soon after by 190SL/5.

While he reported that weight distribution was not as good as in the normal 190SL, the driving characteristics were good with the exception of the front springs being too soft. In June 1956, the two W127s had their baptism of fire on the Nordeschleife circuit of the Nürburgring with Rudi Uhlenhaut and Karl Kling as drivers.

They lapped in perfect concert with each other in a time of 11 minutes, 29 seconds for lap after lap. Arthur Mischke, in a regular 190SL, was only able to manage lap times that were a good 25 seconds slower. Further tests continued on the Gross Glockner and other alpine areas. 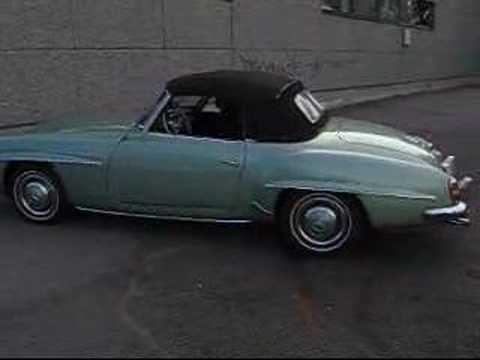