The Batmobile-to-be was the brainchild of Lincoln Mercury's postwar chief stylist, Bill Schmidt. Inspired by a scuba-diving encounter with a shark, Schmidt sketched a low, long, wide, and flat vision of the future with a predatory full width grille, ominously hooded headlights, and killer tail fins. Built by Ghia in 1955, the $250,000 dream car was dubbed the Lincoln Futura. It took just three months to ready the concept car for its debut at the Chicago Auto Show in January 1955. From there, the futuristic Lincoln was driven to a show in Detroit. On March 3rd, just before the NY Auto Show, with Benson Ford at the experimental steering wheel and Schmidt in the passenger seat, the Futura cruised from the United Nation's building through Central Park to the Tavern on the Green (restaurant) for a photo session. The Futura went on The Ed Sullivan Show, which Lincoln sponsored, then to a guest shot on Dave Garroway's TV Show.

The Lincoln Futura was a concept car designed by the Lincoln division of Ford Motor Company. It was built by Ghia entirely by hand in Italy at a cost of $250,000 and displayed on the auto show circuit in 1955.

Futura's styling was extravagantly impractical even by the standards of the '50s, with a double, clear-plastic canopy top, exaggerated hooded headlight pods, and very large, outward-canted tailfins at both ends of the vehicle. Nevertheless, the Futura had a complete powertrain and was fully operable in contrast to many show cars then and now. Its original color was white, and was one of the first Pearlescent color treatments, using ground pearl to achieve the paint effect. The Futura was powered by a 368 cubic inch Lincoln engine and powertrain; the chassis was that of a Lincoln Mark II.

The Futura was a success as a show car, garnering a great deal of favorable publicity for Ford. It was released as a model kit and a toy, and in a much more subdued form its headlight and tailfin motifs would appear on production Lincolns for 1956 and 1957. It even played a prominent part in a movie, 1959's It Started with a Kiss, starring Debbie Reynolds and Glenn Ford. For the movie, it was painted red, as the pearlescent finish did not photograph well. 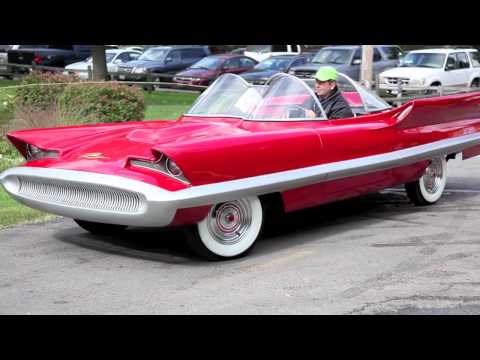