The Ford Crown Victoria (commonly nicknamed the Crown Vic) is a rear-wheel drive full-size car first produced by the Ford Motor Company for the North American market in the mid-1950s.

Its current incarnation has been in production since 1992 at Ford's St. Thomas Assembly plant. While the Crown Victoria shares its platform and components with the Lincoln Town Car, it shares almost no exterior sheet metal or interior parts. Beginning with the 2008 model year, it has been available only for fleet sales, mainly in police and taxi form, but also for rental car companies.
The Crown Victoria, and its Mercury and Lincoln stablemates, are the only full-frame rear-wheel-drive passenger cars built in North America and also three of the few surviving US vehicles still in production with features such as the column-mounted gear shift and a two-bench, six-passenger seating layout, which has otherwise largely been replaced by the two front-bucket layout popularized by imports.
Since the exit of General Motors from rear-drive full-size cars with the Chevrolet Caprice, it held a near-monopoly as a pursuit vehicle in North America, despite front-wheel-drive offerings such as the Chevrolet Impala. While newer front-wheel drive platforms may have been popular among consumers, they have not challenged the Crown Victoria's dominance as a taxi cab, fleet vehicle and police car where durability, cost and performance rather than efficiency are top requirements. The Crown Victoria remains popular for these applications due to its conventional rear-wheel drive, V8 power, popular with police driving techniques. As one of the few remaining passenger cars with body-on-frame construction, it is rugged, and enables repairs after minor accidents without the need to straighten the chassis – an important benefit for a car frequently used by police forces for PIT maneuvers, a maneuver in which the back left or back right corner of a fleeing vehicle is gently pushed with the front left or front right corner of the chase vehicle, disrupting tire adhesion on the fleeing vehicle with the goal of causing the fleeing vehicle to rotate and decelerate.
However, the Dodge Charger has started to challenge this dominance with some significant adoptions among police and taxi fleets since its introduction.

The first "Crown Victoria" appeared in 1955; it was a 2-door 6-seater coupe, part of the Ford Fairlane range, that differed from the regular Victoria model (named after a type of carriage) by having a stainless steel band that 'crowned' the roofline, passing right over the car, as an extension of the B-pillar line. The model was produced in 1955 and 1956.
One version called Ford Crown Victoria Skyliner had the front part of the roof, in front of the steel band, in acrylic glass. This made the car difficult to sell, especially in the southern states in USA. Thus few Skyliners were made. Most of them ended up in Sweden, possibly because the climate was more suitable for an acrylic glass roof.

For 1955, the Fairlane name replaced the Crestline as Ford's premier full-size offering. Overshadowed then and especially now by the contemporary Chevrolet Bel Air, the Fairlane was nevertheless successful and considered quite desirable and stylish. Six different body styles were offered, including the Crown Victoria Skyliner with a tinted, transparent plastic roof, the regular Crown Victoria coupe with lots of stainless steel trim, a convertible Sunliner, Victoria coupe, and traditional sedans. All featured the trademark stainless-steel "Fairlane stripe" on the side. Power options were a 223 in³ (3.7 L) straight-6 engine and a 272 in³ (4.5 L) V8.
1956 saw few changes; a 4-door Victoria hardtop was introduced, and two new, more powerful V8 options, of 292 in³ (4.8 L) and 312 in³ (5.1 L), the latter available up to 225 brake horsepower (168 kW). 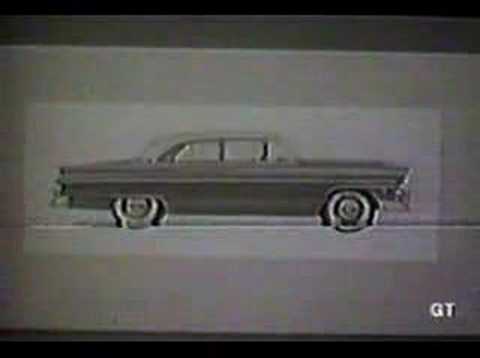