As the race entered its third hour the cars were breaking records at every lap when Jaguar Driver Mike Hawthorn received a signal from his pit crew to stop for gas.

As he braked, an Austin-Healey swerved to avoid him. A few lengths behind, Levegh raised his hand, signaling another Mercedes to slow up. At 150 mph he had no chance to do so himself.

Hitting the Healey, the Mercedes took off like a rocket, struck the embankment beside the track, hurtled end over end and then disintegrated over the crowd. The hood decapitated tightly jammed spectators like a guillotine. The engine and front axle cut a swath like an artillery barrage. And the car's magnesium body burst into flames like a torch, burning others to death. In a few searing seconds 82 people were dead and 76 were maimed. Hawthorn, though unnerved, went on to win and set a new record. But few spectators had the enthusiasm to cheer.

Seventy-seven people have been killed and 77 others injured when two cars collided on the race track and crashed into the spectators' stand at Le Mans in north-west France.
The Mercedes-Benz being driven by Pierre Levegh hit the bank by the grandstand and immediately exploded. Parts of the wreckage were blown into the enclosure, killing scores of mostly-French spectators.

The accident happened about two hours after the 24-hour race began at the Le Mans circuit. There was no official announcement of the disaster and the race was allowed to continue.

Pierre Levegh was speeding down the straight in front of the pits when he clipped the Austin-Healey driven by British driver Lance Macklin.

The 300 SLR struck the mound at such speed and angle that it was launched into a somersault, which caused loosened and damaged parts of the car to be flung away from the car. This included the bonnet and the front axle, both of which separated from the frame and landed in the crowd. With the front of the spaceframe chassis—and thus crucial engine mounts—destroyed, the car's heavy engine block also broke free and hurtled into the crowd. Levegh was also thrown free of the somersaulting car, fatally crushing his skull when he landed.
As the remains of the 300 SLR slowed its somersault, the fuel tank, situated behind Levegh's seat, ruptured. The ensuing fuel fire raised the temperature of the remaining Elektron bodywork past its flashpoint, which due to its high magnesium content was already very low. Magnesium's properties mean that a combustion in oxygen is possible at relatively low temperatures, and the alloy burst into white hot flames, sending searing embers onto the track and into the crowd. Rescue workers attempting to put out the burning wreckage were initially unsuccessful, as they unknowingly used water on the magnesium fire, which only intensified the inferno. As a result, the car burned for several hours. In total, 80 spectators were killed either by flying parts and debris or from the fire. 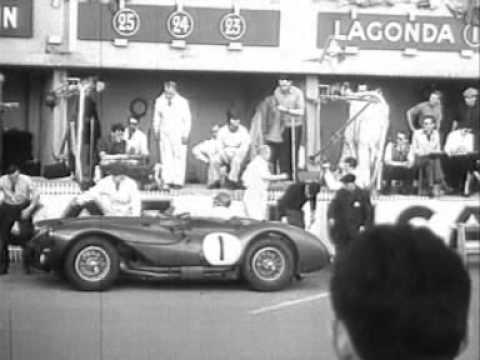