The 1955 Stanley Cup Final NHL championship series was contested by the Montreal Canadiens, appearing in their fifth of ten straight Finals and the defending champion Detroit Red Wings, in the fourth Detroit-Montreal Final series of the 1950s and the second consecutively. The Wings would win the series 4–3 to win their second consecutive Stanley Cup and fourth in six seasons. It would be 42 years before Detroit would win another cup.

Prior to the playoffs, Montreal's Maurice Richard was suspended and would be missed by the Canadiens.
In the second game, Ted Lindsay would score 4 goals to set a NHL record for most goals in one game in a Final series. The win was also the Wings' fifteenth consecutive, another NHL record.
Gordie Howe set two NHL records, amassing 12 points, and he surpassed Toe Blake's point mark for the playoffs with 20 points in 11 games.
This was also the first final in which the home team won all seven games of the series.

In one of the most memorable moments in NHL history, Montreal Canadiens' Maurice Richard was suspended for the balance of the regular season and the Stanley Cup playoffs. This suspension came as a result of his physical contact with an NHL official on March 17. Fans rioted in Montreal and Richard was forced to issue a statement to calm the angry Montreal fans. As for the rest of the Canadiens team, they defeated Boston to earn a spot in the final, but came up short against Detroit for the Stanley Cup. Detroit, led by Alex Delvecchio and Gordie Howe, were able to defeat the Canadiens, earning their second straight Stanley Cup championship. For the first time in Stanley Cup final history, the home team won all seven games.

The Red Wings posted a perfect home slate in defending their Stanley Cup crown, sweeping Toronto in the semifinals, then taking Montreal in a seven-game final by winning all four games on Olympia ice.

They also established several post-season benchmarks. During a 7-1 rout of the Habs in Game 2, Ted Lindsay collected club records with four goals in the game and four points in one period. Gordie Howe posted his first Stanley Cup hat trick in Game 5 of the final and the line of Lindsay, Howe and Earl (Dutch) Reibel established a Detroit mark by combining for 51 post-season points. Howe's 20 points were a new Stanley Cup record and Lindsay's 12 assists tied the mark set by Montreal's Elmer Lach in the 1945-46 playoffs.

Combined with their nine-game win streak to conclude the regular season, Detroit won 15 consecutive games before succumbing 4-2 at Montreal in Game 3 of the finals. 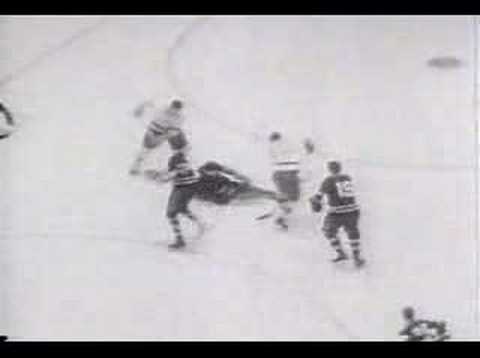