The Montgomery Bus Boycott was a political and social protest campaign started in 1955 in Montgomery, Alabama, USA, intended to oppose the city's policy of racial segregation on its public transit system.

Many historically significant figures of the civil rights movement were involved in the boycott, including Martin Luther King, Jr. and others, as listed below. The boycott resulted in a crippling financial deficit for the Montgomery public transit system, because the city's black population who were the drivers of the boycott were also the bulk of the system's ridership. The ensuing struggle lasted from December 1, 1955, when Rosa Parks, an African American woman, was arrested for refusing to surrender her seat to a white person, to December 20, 1956 when a federal ruling took effect, and led to a United States Supreme Court decision that declared the Alabama and Montgomery laws requiring segregated buses to be unconstitutional.

On the night of Rosa Parks' arrest, Jo Ann Robinson, head of the Women's Political Council, printed and circulated a flyer throughout Montgomery's black community which read as follows:
"Another woman has been arrested and thrown in jail because she refused to get up out of her seat on the bus for a white person to sit down. It is the second time since the Claudette Colvin case that a Negro woman has been arrested for the same thing. This has to be stopped. Negroes have rights too, for if Negroes did not ride the buses, they could not operate. Three-fourths of the riders are Negro, yet we are arrested, or have to stand over empty seats. If we do not do something to stop these arrests, they will continue. The next time it may be you, or your daughter, or mother. This woman's case will come up on Monday. We are, therefore, asking every Negro to stay off the buses Monday in protest of the arrest and trial. Don't ride the buses to work, to town, to school, or anywhere on Monday. You can afford to stay out of school for one day if you have no other way to go except by bus. You can also afford to stay out of town for one day. If you work, take a cab, or walk. But please, children and grown-ups, don't ride the bus at all on Monday. Please stay off all buses Monday."[6]
The next morning at a church meeting led by the new MIA head, King, a citywide boycott of public transit was proposed to demand a fixed dividing line for the segregated sections of the buses. Such a line would have meant that if the white section of the bus was oversubscribed, whites would have to stand; blacks would not be forced to remit their seats to whites.
This demand was a compromise for the leaders of the boycott who believed that the city of Montgomery would be more likely to accept it rather than a demand for a full integration of the buses. In this respect, the MIA leadership followed the pattern of earlier boycott campaigns in the Deep South during the 1950s. A prime example was the successful boycott a few years earlier of service stations in Mississippi for refusing to provide restrooms for blacks. The organizer of that campaign, T. R. M. Howard of the Regional Council of Negro Leadership, had spoken on the brutal slaying of Emmett Till as King's guest at the Dexter Avenue Baptist Church only four days before Parks's arrest. Parks was in the audience and later said that Emmett Till was on her mind when she refused to give up her seat.[7]
The MIA's demand for a fixed dividing line was to be supplemented by a requirement that all bus passengers receive courteous treatment by bus operators, be seated on a first-come, first-served basis, and blacks be employed as bus drivers. The proposal was passed, and the boycott was to commence the following Monday. To publicize the impending boycott it was advertised at black churches throughout Montgomery the following Sunday.
On Saturday, December 3, it was evident that the black community would support the boycott, and very few blacks rode the buses that day. That night a mass meeting was held to determine if the protest would continue, and attendees enthusiastically agreed. The boycott proved extremely effective, with enough riders lost to the city transit system to cause serious economic distress. Martin Luther King later wrote "[a] miracle had taken place." Instead of riding buses, boycotters organized a system of carpools, with car owners volunteering their vehicles or themselves driving people to various destinations. Some white housewives also drove their black domestic servants to work, although it is unclear to what extent this was based on sympathy with the boycott, versus the desire to have their staff present and working.[citation needed] When the city pressured local insurance companies to stop insuring cars used in the carpools, the boycott leaders arranged policies with Lloyd's of London.
Black taxi drivers charged ten cents per ride, a fare equal to the cost to ride the bus, in support of the boycott. When word of this reached city officials on December 8, 1955, the order went out to fine any cab driver who charged a rider less than 45 cents. In addition to using private motor vehicles, some people used non-motorized means to get around, such as cycling, walking, or even riding mules or driving horse-drawn buggies. Some people also hitchhiked. During rush hours, sidewalks were often crowded. As the buses received extremely few, if any, passengers, their officials asked the City Commission to allow stopping service to black communities.[8] Across the nation, black churches raised money to support the boycott and collected new and slightly used shoes to replace the tattered footwear of Montgomery's black citizens, many of whom walked everywhere rather than ride the buses and submit to Jim Crow laws.
In response, opposing whites swelled the ranks of the White Citizens' Council, the membership of which doubled during the course of the boycott. The councils sometimes resorted to violence: Martin Luther King's and Ralph Abernathy's houses were firebombed, as were four black Baptist churches. Boycotters were often physically attacked.
Under a 1921 ordinance, 156 protesters were arrested for "hindering" a bus, including King. He was ordered to pay a $500 fine or serve 386 days in jail. He ended up spending 2 weeks in jail. The move backfired by bringing national attention to the protest. King commented on the arrest by saying: "I was proud of my crime. It was the crime of joining my people in a nonviolent protest against injustice."

The Montgomery Bus Boycott a year-long protest in Montgomery, Alabama, that galvanized the American Civil Rights Movement and led to a 1956 decision by the Supreme Court of the United States declaring segregated seating on buses unconstitutional.

In December 1955, 42,000 black residents of Montgomery began a year-long boycott of city buses ( Montgomery Bus Boycott ) to protest racially segregated seating. After 381 days of taking taxis, carpooling, and walking the hostile streets of Montgomery, African Americans eventually won their fight to desegregate seating on public buses, not only in Montgomery, but throughout the United States.

The protest was first organized by the Women's Political Council as a one-day boycott to coincide with the trial of Rosa Parks, who had been arrested on December 1, 1955, for refusing to give up her seat to a white man on a segregated Montgomery bus. By the next morning, the council, led by JoAnn Robinson, had printed 52,000 fliers asking Montgomery blacks to stay off public buses on December 5, the day of the trial. Meanwhile, labor activist E. D. Nixon, who had bailed Parks out of jail, notified Ralph Abernathy, minister of the First Baptist Church, and Martin Luther King Jr., the new minister at Dexter Avenue Baptist Church, of Parks's arrest. A group of about 50 black leaders and one white minister, Robert Graetz, gathered in the basement of King's church to endorse the boycott and begin planning a massive rally for the evening of the trial. Graetz offered his support from the pulpit of his predominantly white Lutheran church. The Montgomery Chapter of the National Association for the Advancement of Colored People (NAACP), which had been looking for a test case for segregation, began preparing for the legal challenge.

The Montgomery bus boycott looms as a formative turning point of the twentieth century: harbinger of the African American freedom movement, which in turn inspired movements for freedom around the globe; springboard for the leadership of Martin Luther King Jr. in civil rights, human rights and peacemaking; launching pad for the worldwide era of upheaval known as the “sixties”. The bus boycott stands for all times as one of humankind’s supreme democrtatic moments, a monumental struggle to actualize the American dream of freedom, equality and constitutionalism. The nonviolent uprising of 1955 and 1956 represented a new founding of American democracy that pushed the nation a quantum leap closer to keeping faith with parchment principles.

---from The Daybreak of Freedom

If any single event touched off the activist phase of the civil rights movement, it was the Montgomery bus boycott of 1955-56. Triggered by the refusal of a black seamstress, Mrs. Rosa Parks, to take her place at the back of a city bus when the driver demanded it, this grass-roots movement led by the young Martin Luther King lasted for just over a year, from 1955 to late in the next year. For the first time since the depression, political initiative shifted from Washington back into the country itself, in this case the courts, schools, lunch counters, courthouses, streets and jails of the South.

---from The Experience of Politics 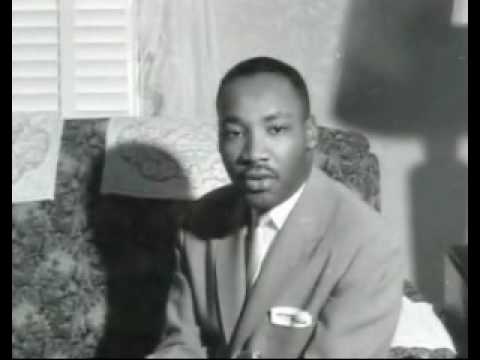