Remarkable firsts included the use of Desmodromic valves and fuel injection developed by Mercedes engineers through experience gained on the Messerschmitt Bf 109 fighter engine during World War II.
The legendary Mercedes-Benz 300 SLR was derived from the W196 for the 1955 World Sportscar Championship season.

The W196's delayed debut on the 1954 French Grand Prix circuit saw the introduction of the aerodynamic aluminum "Type Monza" body for the high speed track at Reims-Gueux, Fangio and Karl Kling claiming a 1-2 finish and youngster Hans Herrmann posting fastest lap. The same body was later used at Monza, where it picked up its nickname.

Attractive as it was, the streamlined Monza body was not situable for twistier tracks, leading to defeat at its second race at Silverstone. A conventional open-wheel-version was introduced at the Nürburgring. Fangio, who had already won the first two GPs of 1954 with a Maserati, won this and the two following GPs, securing his 2nd World Championship.
At the 1954 Spanish Grand Prix in late October the low-mounted Mercedes air-intake clogged with leaves, costing the race and leading to its relocation atop the hood.
In the shortened 1955 Formula One season, abbreviated after the 1955 Le Mans disaster, the W196 won all but the 1955 Monaco Grand Prix, Hans Herrmann crashing in practice, and the other three team Mercedes cars failing to finish. A highlight for driver Stirling Moss was his finish 0.2 seconds ahead of stable mate Fangio at his home event, the 1955 British Grand Prix, his first GP win.
After capturing all three world championships it competed in, Mercedes withdrew from motorsport at the end of the 1955 season. Despite its good track performance, drivers Fangio and Moss described the car in Motor Sport magazine as being "a bit difficult to drive, with a tendency for snap oversteer".

The Mercedes W196 introduced at the 1954 Reims Grand Prix. 20 years after their first GP car, the W25. The W196 was a new design and looked unique. It had an innovative straight 8 cylinder engine that was tilted 37 degrees to reduced frontal area. The W196 was equipped with a desmodromic valve operating systems instead of sprung valves, with one camshaft opening the valves and a second one closing them again. Also missing were carburetors as the Bosch direct fuel injection developed for the 300 SL was used. To decrease the un-sprung weight the drum brakes were moved inboard.

Juan Manuel Fangio, form Argentina, drove the Mercedes W196 to its first victory at its first Grand Prix, with his team mate Kling just behind and the third place Ferrari a lap behind. The low drag streamline body that had been so successful on the high speed Reims circuit blocked Fangio's view at Silverstone in the next Grand Prix as he could not see the front wheels and apex the corners like wanted to. He finished a mere fourth. For the Nurburgring GP a new open wheeled bodywork was ready, it didn't look quite as good as the streamlined version of the W196 but it was just as purposeful. Fangio went on to win the 1954 and 1955 World Championships. In 1955 Moss lead three other W196s to victory in the British Grand Prix at Aintree. 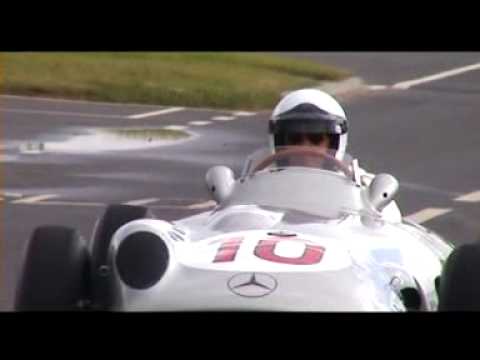 View other events that happened in 1954