The scene was originally filmed during the early morning hours of September 15, 1954, at the corner of Lexington Avenue and 52nd Street.

Heavily publicized beforehand, it attracted a thousand or more spectators like iron filings to a magnet. Also on hand were Monroe’s husband, Joe Dimaggio, scores of photographers, and a sizeable contingent of New York’s finest called in to maintain order. Under Wilder’s relaxed but firm direction, the lead actors undertook repeated takes exiting the famous Trans-Lux Theater and exchanging flirtatious banter until the magic moment when Monroe’s dress is blown heavenward, revealing her million dollar legs and—scandalously for the era—white underpants.

The famous picture of Marilyn Monroe, laughing as her skirt is blown up by the blast from a subway vent, is shot on this day in 1954 during the filming of The Seven Year Itch. The scene infuriated her husband, Joe DiMaggio, who felt it was exhibitionist, and the couple divorced shortly afterward.

The footage of Monroe's dress billowing over a subway grate was shot twice: The first take was shot at Manhattan's Lexington Avenue at 52nd Street and the second on a sound stage. The sound stage footage is what made its way into the final film, as the original on-location footage's sound had been rendered useless by the over excited crowd present during filming whistling over Monroe's see-through panties. 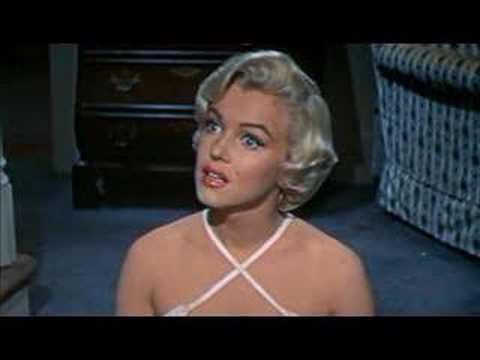