The film takes place in Warring States Period Japan (around 1587/1588). It follows the story of a village of farmers that hire seven masterless samurai (ronin) to combat bandits who will return after the harvest to steal their crops.

Akira Kurosawa's epic tale concerns honor and duty during a time when the old traditional order is breaking down. The film opens with master samurai Kambei (Takashi Shimura) posing as a monk to save a kidnapped farmer's child. Impressed by his selflessness and bravery, a group of farmers begs him to defend their terrorized village from bandits. Kambei agrees, although there is no material gain or honor to be had in the endeavor. Soon he attracts a pair of followers: a young samurai named Katsushiro (Isao Kimura), who quickly becomes Kambei's disciple, and boisterous Kikuchiyo (Toshiro Mifune), who poses as a samurai but is later revealed to be the son of a farmer. Kambei assembles four other samurais, including Kyuzo (Seiji Miyaguchi), a master swordsman, to round out the group. Together they consolidate the village's defenses and shape the villagers into a militia, while the bandits loom menacingly nearby. Soon raids and counter-raids build to a final bloody heart-wrenching battle. ~ Jonathan Crow, All Movie Guide 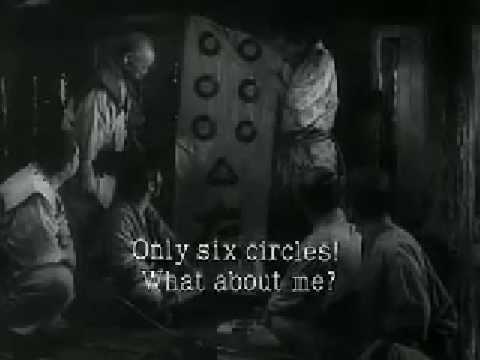