The Giants swept the Series in four games to win their first championship since 1933, defeating the heavily favored Indians, who had won an AL-record 111 games in the regular season. The Series is perhaps best-remembered for "The Catch", a sensational running catch made by Giants center fielder Willie Mays in Game 1, snaring a long drive by Vic Wertz near the outfield wall with his back to the infield. It is also remembered for utility player Dusty Rhodes' clutch hitting in three of the four games. Giants manager Leo Durocher won his only title among the three pennants he captured in his career. As of 2009, it remains the last World Series victory for the Giants. The San Francisco Giants have never won a World Series since the 1958 move to the West Coast.
This was the first time the Cleveland Indians had been swept in a World Series and the first time the New York Giants had swept an opponent without qualification. They had won four games without a loss in the 1922 World Series, but there was also one tied game. Game 4 was the last World Series game at Cleveland Stadium; the Indians did not return to the World Series until 1995, a year after Progressive Field opened.

It was no surprise that a representative from the great city of New York was listed on the ticket stub to the 1954 World Series. However, it was surprising that the name that appeared printed was not that of the New York Yankees. After winning five consecutive Fall Classics, the "Bronx Bombers" had fallen short (despite winning one-hundred three games) and were replaced by the Cleveland Indians who boasted the strongest pitching rotation in all of baseball. Bob Lemon, Early Wynn and Mike Garcia had dominated the American League (.721 winning percentage) and were clearly favored going into the '54 contest. Their opponents, the New York Giants, had rebounded after a fifth place finish in '53 for a five-game lead over the defending National League champion Brooklyn Dodgers. Willie Mays (National League-leading .345, with forty-one home runs and one-hundred ten runs batted in) had returned from the United States Army and Johnny Antonelli (with twenty-one wins) was acquired during the off-season for a formidable 1-2 combination. Still, many had predicted that the Indians would sweep the Series due to the Giants post-season debacles of the past and Cleveland's surprise dethroning of the perennial champion Yankees.

Game 1 was held at the Polo Grounds and the fans in attendance witnessed what is considered by many to be the greatest defensive play in World Series history. With the opener tied at 2-2 (in the eighth) and two Cleveland runners on base, Willie Mays made a spinning, over-the-shoulder catch (of a 460-foot smash from Vic Wertz) in deep centerfield and fired a bullet to the infield that held the runners from tagging up and scoring. Despite a comeback rally later in the game, the Giants held on for the 5-2 win after pinch-hitter Dusty Rhodes (a .341 hitter in part-time duty) hit a three-run, tenth-inning home run off of Bob Lemon.

Rhodes continued to shine in Game 2 with a game-tying pinch single in the fifth inning and another homer in the seventh. Once again, New York emerged as the 3-1 victor, with Cleveland notching its only run on a first-pitch-of-the-game homer by Al Smith. After yielding the opening smash, Antonelli appeared unshaken and pitched effectively the rest of the way. As the Series moved to Cleveland, Manager Al Lopez's Indians hoped for a little luck and a lot of "home field advantage". Unfortunately neither would come in Game 3 as the Giants struck for a first-inning run, then got three in the third as the Series standout, Rhodes, came through with a two-run pinch single with the bases loaded. New York's Ruben Gomez and Hoyt Wilhelm combined on a four-hitter, and the hometown Indians lost, 6-2.

For Game 4, New York prepared to sweep Cleveland and led 7-0 after a mere 4½ innings. Despite his sinking ship, Hank Majeski made a last desperate attempt (in the fifth) with a three-run pinch-homer off of Don Liddle to close within three. The always-steady Antonelli stalled the rally and closed out the Tribe with 1 2/3 innings of hitless relief. For the sixth consecutive season, the World Championship title remained in New York, although this time it was in the hands of the National League. It would stay in the "Big Apple" for the next two years, sharing time in both the American and National League clubhouses. 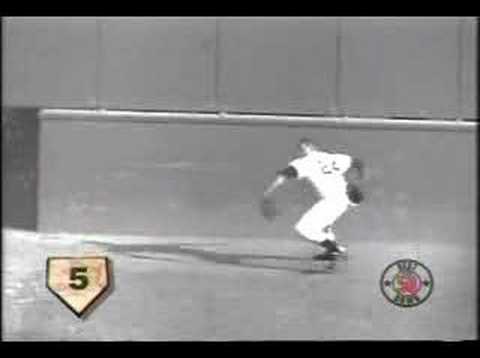