"From Here To Eternity" Is Released

From Here to Eternity is a 1953 drama film based on the novel of the same name by James Jones.

It deals with the troubles of soldiers, played by Burt Lancaster, Montgomery Clift, Frank Sinatra, and Ernest Borgnine stationed on Hawaii in the months leading up to the attack on Pearl Harbor. Deborah Kerr and Donna Reed portrayed the women in their lives.

The scene is Schofield Army Barracks in Honolulu, in the languid days before the attack on Pearl Harbor, where James Jones' acclaimed war novel From Here to Eternity brought the aspirations and frustrations of several people sharply into focus. Sergeant Milt Warden (Burt Lancaster) enters into an affair with Karen (Deborah Kerr), the wife of his commanding officer. Private Robert E. Lee "Prew" Prewitt (Montgomery Clift) is a loner who lives by his own code of ethics and communicates better with his bugle than he does with words. Prew's best friend is wisecracking Maggio (Frank Sinatra, in an Oscar-winning performance that revived his flagging career), who has been targeted for persecution by sadistic stockade sergeant Fatso Judson (Ernest Borgnine). Rounding out the principals is Alma Lorene (Donna Reed), a "hostess" at the euphemistically named whorehouse The New Congress Club. All these melodramatic joys and sufferings are swept away by the Japanese attack on the morning of December 7. No words could do justice to the film's most famous scene: the nocturnal romantic rendezvous on the beach, with Burt Lancaster's and Deborah Kerr's bodies intertwining as the waves crash over them. If you're able to take your eyes off the principals for a moment or two, keep an eye out for George Reeves; his supporting role was shaved down when, during previews, audiences yelled "There's Superman!" and began to laugh. From Here to Eternity won eight Academy Awards, including Best Picture, Best Director, Best Adapted Screenplay, and supporting awards to Sinatra and Reed. ~ Hal Erickson, All Movie Guide 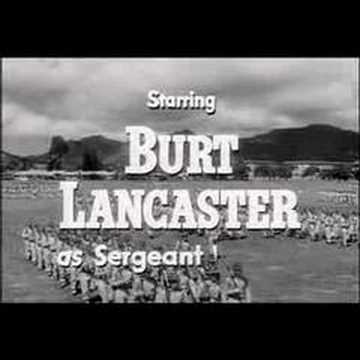