The 1950-53 Korean War ended in an armistice, with neither side able to claim outright victory.

Fifty years on, the truce is still all that technically prevents North Korea and the US - along with its ally South Korea - resuming the war, as no peace treaty has ever been signed.

Both sides regularly accuse the other of violating the agreement, but the accusations have become more frequent as tensions rise over North Korea's nuclear programme.

When the armistice was signed on 27 July 1953, talks had already dragged on for two years, ensnared in testy issues such as the exchange of prisoners of war and the location of a demarcation line.

Military commanders from China and North Korea signed the agreement on one side, with the US-led United Nations Command signing on behalf of the international community. South Korea was not a signatory.

The armistice was only ever intended as a temporary measure.

The document, signed by US Lieutenant General William K Harrison and his counterpart from the North's army, General Nam Il, said it was aimed at a ceasefire "until a final peaceful settlement is achieved".

However, that settlement never came, and a conference in Geneva in 1954 which was designed to thrash out a formal peace accord ended without agreement.

The armistice is still the only safeguard for peace on the Korean peninsula.

The agreement provided for:

* A suspension of open hostilities

* A mechanism for the transfer of prisoners of war

Both sides pledged not to "execute any hostile act within, from, or against the demilitarized zone", or enter areas under control of the other.

The agreement also called for the establishment of the Military Armistice Commission (MAC) and other agencies to ensure the truce held.

The MAC, which comprises members from both sides, still meets regularly in the truce village of Panmunjom.

Despite the relative peace since the war ended, tensions remain high between the two Koreas, and their border remains the most heavily militarised frontier in the world.

On November 29, 1952, U.S. President-elect Dwight D. Eisenhower fulfilled a campaign promise by going to Korea to find out what could be done to end the conflict. With the UN's acceptance of India's proposal for a Korean armistice, a cease-fire was established on July 27, 1953, by which time the front line was back around the proximity of the 38th parallel, and so a demilitarized zone (DMZ) was established around it, presently defended by North Korean troops on one side and by South Korean, American and UN troops on the other. The DMZ runs north of the parallel towards the east, and to the south as it travels west. The site of the peace talks, Kaesong, the old capital of Korea, was part of the South before hostilities broke out but is now part of the North. North Korea and the United States signed the Armistice Agreement, with Syngman Rhee refusing to sign. 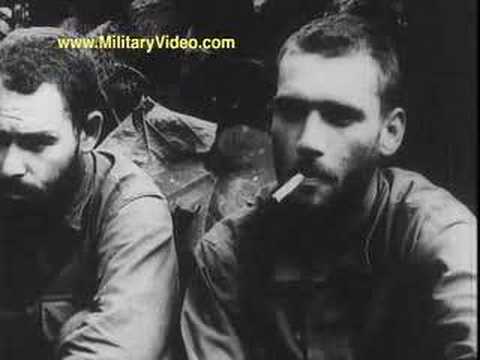