At 10.21 p.m. on Christmas Eve 1953 the Wellington–Auckland night express plunged into the flooded Whangaehu River at Tangiwai, 10 kilometres west of Waiouru in the central North Island.

Of the 285 passengers on board, 151 died in New Zealand's worst railway accident.

It was, at the time, the world’s eighth-biggest rail disaster and made headlines around the globe. The nation was stunned. With New Zealand’s population at just over two million, many people had a direct relationship with someone involved in the tragedy.

The place name Tangiwai means ‘weeping waters’ in Maori. The timing of the accident added to the sense of tragedy. Most of those on the train were heading home for Christmas, armed with presents for friends and family. Over the following days, searchers found many battered, mud-soaked presents, toys and teddy bears on the banks of the Whangaehu River. Those waiting to meet their loved ones at the various stations up the line had no sense of the tragedy unfolding on the volcanic plateau.

In the distance was Mount Ruapehu, an active volcano of some 9000 feet. Of those travelling that night, few would have given it a second thought for it had not erupted since 1948. However deep within the mountain, the forces of nature were at work. A lake had formed in its crater creating a huge weight of water. Forces created within the mountain caused the water to find a sudden exit in cave beneath the Whangaehu glacier. As the massive flow of water left the mountain it gathered volcanic ash and lumps of ice. As it proceeded along the river valley it collapsed the valley sides and collected silt and boulders and other debris forming a massively destructive lahar.

It swept down the valley and completely overwhelmed the bridge ahead of the train. The fourth pier was demolished and the fifth damaged. The postmaster from the town of Taihape saw the damage to the bridge and attempted to warn the approaching train by running along the track waving a torch. It is probable that the driver saw his frantic efforts to avert disaster as subsequent examination of the locomotive showed that the brakes had been applied. 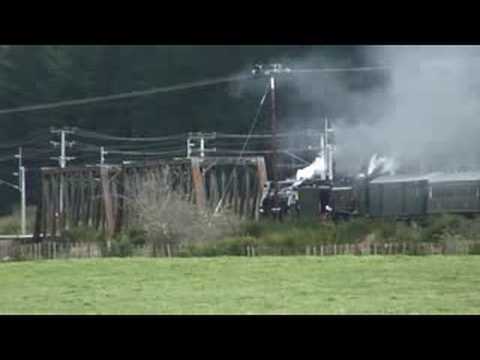