The only problem, however, was that the "Resolution" was actually several miles south of their reported position.

At about 8:42 AM., the flight reported in, "Air Pacific Easy, Roger, southeast, turning inbound". It was the last transmission from the "Resolution". Three minutes later, at 8:45 AM, a call from the air traffic control to the "Resolution" went unanswered. Destined to arrive at the airport any moment, the plane had gone silence.

Shortly after the loss of radio contact, at 9:26 AM, four Coast Guard aircraft, including a PB-1, a variant of the B-17 "Flying Fortress", were dispatched from the nearby Air Station at San Francisco, to search for the plane. At 10:10 AM., nearly an hour and a half after the crash, the Coast Guard aircrew aboard the PB-1, piloted by Lt. Commander Donald M. Reed, located a single column of smoke rising from the densely-packed Redwoods on the southwest side of Kings Mountain, west of Redwood City.

Flight 304 and the "Resolution" had crashed, tearing a path of destruction in the forest below, and igniting several fires with the remaining fuel.

At 08:39, the flight called San Francisco Approach Control, identified itself as "Air Pacific Echo" and advised that it was over Half Moon Bay, 500 on top. Approach Control acknowledged and gave the following clearance: "Cleared for an ILS approach to the airport, runway 28, wind west 15; cross the outer marker initial at least 500 on top, report when inbound; ceiling 1.200, visibility nine. altimeter 30.14."

Approximately three minutes later, the flight made a report which was acknowledged by the controller as "Air Pacific Easy, Roger, southeast, turning inbound"; the controller then added. "Check passing the ILS outer marker inbound."

His actual position however was southwest of the airport - not southeast. It is therefore probable that the captain after reporting over Half Moon Bay either saw the terrain momentarily through an unreported break in the overcast or because of a radio navigational error became convinced that his position was farther northeast, and started to let down over what he believed was the proper area for this descent.

The DC-6 initially struck and topped several large redwood trees, continued across a narrow ravine and crashed against the side of a steeply rising slope approximately one-half mile beyond the first tree struck. The elevation of this tree at the point of contact was 2902 feet MSL.

British Commonwealth Pacific Airlines (BCPA) Flight 304 was a Douglas DC-6 named Resolution and registered VH-BPE, on a flight from Sydney, Australia, to Vancouver, British Columbia in Canada, with scheduled stops at Nadi (Fiji), Canton Island, Honolulu and San Francisco. It crashed during its initial approach towards San Francisco International Airport on October 29, 1953, killing all 19 people on board, including the American pianist William Kapell.
The aircraft was flying the Honolulu - San Francisco leg with a crew of 8 and 11 passengers (10 adults and 1 child). Captain Bruce N. Dickson (aged 34) and his crew took over the plane in Honolulu as scheduled. 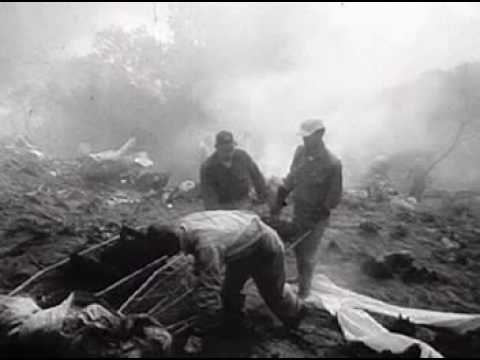