The Ford Ranch Wagon was a station wagon built by Ford Motor Company from 1952 to 1977.

The Ranch Wagon was a full-size model, except in 1963 and 1964, when it was part of the intermediate-size Fairlane series, and represented the lowest-priced selection in its respective line.

In the early 1950s, the era of the wood-bodied station wagon was coming to an end. When Ford introduced a redesigned line of cars for the 1952 model year, its Country Squire continued to cater to buyers who still wanted a station wagon with the look of wood (attained by applying simulated exterior wood decals, which were framed in genuine wood through 1953). But for other wagon buyers, Ford also gave them two new choices that year, the first all-steel wagons in the firm's history. These were the the Country Sedan, a four-door model in the mid-range Customline series; and the Ranch Wagon, which was a two-door model in the economy Mainline series. The Ranch Wagon ran with either the standard "Mileage Maker" six-cylinder engine or the long-familiar flathead V8, which was optional.
After receiving mostly cosmetic changes for 1953, a second Ranch Wagon model, a slightly fancier version in the Customline series, was added for 1954, the year Ford's new Y-block V8 replaced the flathead unit. The two models were renamed Ranch Wagon and Custom Ranch Wagon for 1955, when the entire Ford station wagon set became a series of its own. For 1957, the Del Rio Ranch Wagon was introduced (replacing both the Custom Ranch Wagon and the Parklane), sporting special ranch-pattern upholstery. That same model was the basis for the new 1957 Ranchero. There were three Ranch Wagons the following year, as the first four-door Ranch Wagon was added to the model range. The Del Rio was dropped for 1959, replaced by a one-year-only two-door Country Sedan. By this time, full-size two-door station wagons were fast fading in popularity, and the 1961 two-door Ranch Wagon was the last full-size two-door wagon ever built (along with the two-door Plymouth Deluxe Suburban of that same year), leaving the four-door as the sole Ranch Wagon model for 1962.

The Ranch Wagon returned to the full-size line for 1965. In 1966, it was the beneficiary of Ford's innovative new dual-action Magic Doorgate, which could be opened either down or sideways. In 1968, two new Ranch Wagon models, called the Custom 500 Ranch Wagons, were introduced; one a six-passenger model, the other the first Ranch Wagon furnished with third row seats, Ford's familiar side-mounted dual-facing rear seats.
Ford wagons ceased to be a separate series when they were redesigned for 1969, officially becoming part of the respective series on which they were based; thus that year's base Ranch Wagon was now a member of the low-end Custom series. In 1969, for the first time, all Ranch Wagons were powered by a 302 cu in V8.
The Custom series was dropped when Ford issued the next generation of full-size cars for 1973, meaning all Ranch Wagons were Custom 500s. The 1974 Ranch Wagon was the last available for sale to the general public. Subsequently, small quantities of Ranch Wagons were produced strictly for fleet buyers through 1977, after which the name was retired. 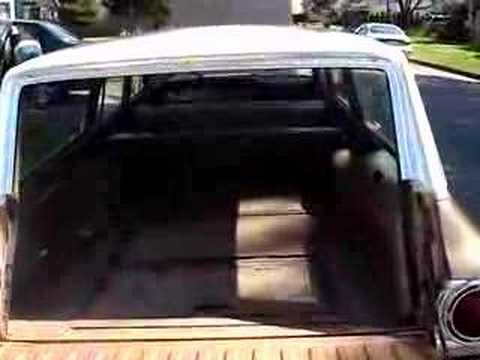