The Ford line of cars was again refreshed for 1952, although remaining similar to the all-new 1949 Fords.

The model lines were again reshuffled, with the base model now called "Mainline" and mid-level called "Customline". The top "Crestline" included the "Sunliner" convertible, "Victoria" hardtop, and "Country Squire" station wagon. Inside was a "flight-style" control panel and new pedals suspended from below the dashboard. The grille sported a single center "bullet" surrounded by a chrome ring as well as "jet intake" corner markers.
Some Fords included a feature called the overdrive. This would allow the driver to go faster without racing the engine.
The big news for 1953 was the availability of power-assisted brakes and steering, which had previously been limited to the Mercury and Lincoln lines. The center grill bullet lost its ring and was now flanked by vertical black stripes, while the corner markers were plain rectangular lights rather than the circular "intakes". All 1953 Fords featured commemorative steering wheels marking the company's 50th anniversary. William Clay Ford paced the Indianapolis 500 in a Sunliner convertible with a dummy Continental tire kit. This was also the last year for real wood trim on the Country Squire wagon.

The 1954 Ford Crestline Sunliner Convertible was a pivot point for its man­ufacturer. On one hand, it carried over the styling (albeit facelifted), the body styles, and the series names in place since 1952. On the other hand, the new lineup, including the 1954 Ford Crestline Sunliner convertible, ushered in certain engineering and detail changes that would live on in its successors.

Foremost among the changes was the switch from Ford's long-serving "flathead" V-8 to a completely modern short-stroke overhead-valve mill. Dubbed the "Y-block" because of its deep crank case, it displaced the same 239.4 cubic inches as the engine it replaced, but generated 130 horsepower, 20 more than its forebear. It would grow larger and more powerful over the next few years.

This was also the year that ball-joint front suspension, already proven in Lincolns, was adopted to improve ride and handling. It was accompanied by a half-inch wheelbase extension. The resulting 115.5-inch wheelbase would serve Fords through 1956.

Then, too, 1954 was the year of the "Astra-Dial" speedometer, which admitted natural light through the rear of the speedometer housing to illuminate the dial. The feature would continue into 1955.

Another of the year's highlights was the first Skyliner, a Victoria two-door hardtop with a Plexiglass roof insert. This feature would be available for two more years. Other new models for 1954 included a two-door Ranch Wagon station wagon in the Customline series and a four-door sedan in the top-end Crestline series.

The hands-down glamour queen of the '54 Ford line was the Crestline Sunliner convertible, or so thought the customers who placed an impressive 36,685 orders for it. Prices started at $2,164 for six-cylinder models, or $2,241 when equip ped with the V-8. How ever, Allan and Elaine Franklin's restored Sunliner featured on this page would have forcefully run up the tab back in its day.

The ragtop's V-8 drives through a Ford-O-Matic automatic transmission ($184). It's also festooned with the power assists then beginning to show up even on low-priced makes: window lifts ($102), brakes ($41), steering ($134), and front-seat adjuster ($64). Add in its deluxe radio, heater/defroster, tinted glass, back-up lamps, an accessory Coronado continental kit, and more, and you'd have made some Ford dealer a very happy man. 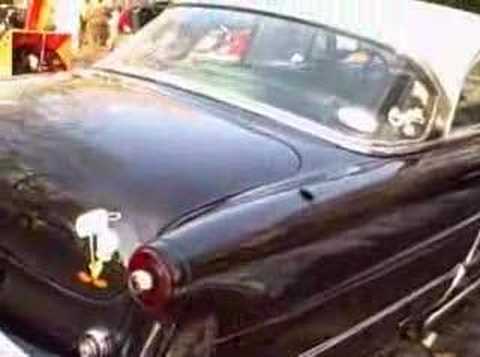