Ikiru (生きる, "To Live"?) is a 1952 Japanese film co-written and directed by Akira Kurosawa. The film examines the struggles of a Tokyo bureaucrat and his final quest for meaning. The film stars Takashi Shimura as Kanji Watanabe.

Akira Kurosawa's Ikiru details the existential struggle of one ordinary man in his desperate search for purpose. Upon learning he has terminal stomach cancer, a low-level government bureaucrat (Takashi Shimura) leaves his job of thirty years without a word to find meaning in the year he has left to live. He is completely alone in the world -- his wife is dead, his son is practically estranged, and his co-workers (the people with whom he has more contact than any others) are little more than strangers. Rather than face a death alone in pathos, Shimura opts to make up for lost time by going to the bar (for the first time in his life), spending every last yen in his wallet and drinking himself to death. There he meets a black-clad artist (a Mephistopheles to his Faust) who leads him on a hellish (and darkly humorous) tour of the city after dark as the two crawl through every booze-soaked juke-joint in town (Kurosawa's classical training as a painter surfaces in this sequence; many critics have noted the striking similarity of the crowded dance hall scenes to the paintings of Hieronymous Bosch, (particularly Walpurgis Night). Realizing he has missed nothing, Shimura then sets his sight on a pretty young girl from the office to divert his attention from his looming mortality. Although the girl fails to serve as a lifebuoy, she does give him the inspiration to do something meaningful -- to leave a legacy, however small, that makes the world a better place. A synopsis of Ikiru cannot serve the film justice; it simply must be seen. ~ Jeremy Beday, All Movie Guide 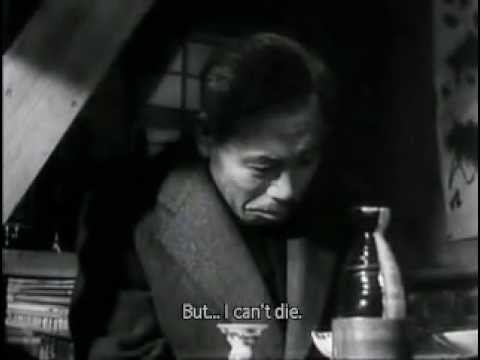