The hope that 1952 would prove to be a good year from the point of view of train accident casualties has been extinguished by the disaster at Harrow & Wealdstone Station, L.M.R., on October 8 which caused 111 deaths - among them many railway staff travelling to work - and a very large number of serious injuries. It was exceeded in that respect in the United Kingdom only by the troop train accident at Gretna, Scotland, on May 22, 1915. Both cases involved a second collision arising from the impossibility of stopping an express which was approaching on the adjacent line, but whereas fire broke out at Gretna and raged for many hours, that complication fortunately was not added to the great destruction done at Wealdstone. After Gretna it was at once made clear that the accident had originated in particularly gross carelessness in the signal box, which led to a shunted train being overlooked. The Wealdstone accident, of which the circumstances were given in our October 10 issue, has profoundly moved the public by reason of the unusually grave loss of life and damage to material. It has not yet been established why the sleeping car express from Perth ran into the local passenger train which had been crossed from the slow line, and was just leaving the station to run fast thereafter.

At least 85 people have been killed and more than 200 injured in the country's worst peacetime rail crash. The accident happened at 0820 GMT at Harrow, a north-west suburb of London.

A London-bound express train from Perth ploughed into the back of the 0731 Tring-Euston commuter train as it was about to leave Harrow and Wealdstone station, on the London Midland region line.

Seconds later, a third train coming from Euston crashed into the wreckage.

Survivors described hearing a deafening sound like an explosion and then broken glass and debris flying everywhere.

Source: '1952: Many die as three trains crash at Harrow'; BBC On This Day Added by: Colin Harris

At 8.20 a.m. on October 8, the 8.15 p.m. express from Perth to Euston ran into the back of the 7.31 a.m. train from Tring to Euston as the latter was standing in Harrow & Wealdstone Station, London Midland Region, the wreckage being thrown across the down fast line. The 8 a.m. express from Euston to Liverpool and Manchester, which was double-headed, collided with the wreckage, as the result of which all six tracks of the L.M.R. Western Division main line were blocked. At the time of going to press, 61 passengers were reported to have been killed and 81 were detained in hospital. 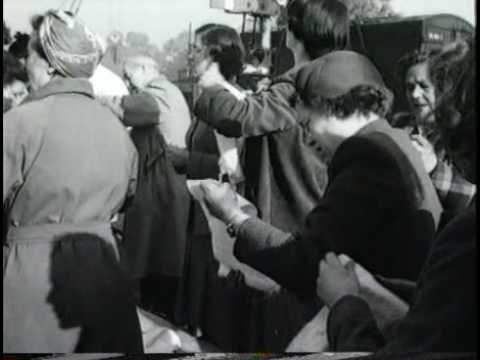