"The Red Badge Of Courage" Is Released

The backstory of The Red Badge of Courage involves the toppling of MGM's old Louis B. Mayer regime in favor of Dore Schary and his young Turks.

It is also the tale of how an intended epic was ruthlessly whittled down to a lower-berth programmer. Since this story has already been related in detail in Lillian Ross' Picture (not to mention several John Huston biographies), the focus here will be what shows up on screen in Red Badge of Courage. Based on the novel by Stephen Crane, the film stars real-life war hero Audie Murphy as a Civil War soldier who must redeem himself in his own eyes after an act of cowardice. When he finally gets his opportunity, he realizes that he is no less frightened than before; it is simply that he has learned to push on in spite of that fear. A comparative newcomer to films, Murphy acquits himself magnificently in the difficult title role; equally impressive are political cartoonist Bill Mauldin as "The Loud Soldier," John Dierkes as "The Tall Soldier" and Royal Dano as "The Tattered Man." When Red Badge of Courage tested poorly in preview, the studio sliced it down to 69 minutes and added a narrator (James Whitmore) to clarify the more obscure plot passages. Further hurting the film was Bronislaus Kaper's overbaked musical score, which seemed more suited to a gung-ho John Wayne flick than a comparatively intimate tale of personal fortitude. Though the finished product plays like a Reader's Digest adaptation, a few brilliant passages remain, notably the sequence in which a commanding officer ingratiatingly lies to his troops for the sake of morale. Like Orson Welles' The Magnificent Ambersons, Red Badge of Courage is a truncated classic -- but a classic, all the same. ~ Hal Erickson, All Movie Guide

The Red Badge of Courage is a 1951 war film made by MGM. It was directed by John Huston and produced by Gottfried Reinhardt with Dore Schary as executive producer. The screenplay is by John Huston, adapted by Albert Band from the Stephen Crane novel of the same name. The cinematography is by Harold Rosson and the music score by Bronislau Kaper. The making of the film is the subject of Lillian Ross's 1952 book Picture.

The American Civil War film is a sparse but faithful retelling of the story, incorporating narration from the text to move the plot forward. Audie Murphy, a hero of World War II who later went into acting, played the lead role of Henry Fleming. Other actors include cartoonist Bill Mauldin, Andy Devine, Arthur Hunnicutt, and Royal Dano. 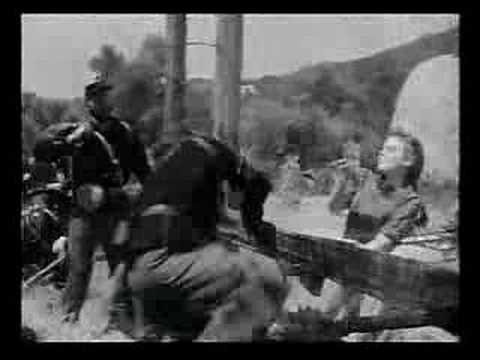