"An American In Paris" Is Released

An American in Paris is a 1951 MGM musical film inspired by the 1928 orchestral composition by George Gershwin.

Starring Gene Kelly, Leslie Caron, and Oscar Levant, the film is set in Paris, and was directed by Vincente Minnelli from a script by Alan Jay Lerner. The music is by George Gershwin, with lyrics by his brother Ira, with additional music by Saul Chaplin, the music director.

The story of the film is interspersed with show-stopping dance numbers choreographed by Gene Kelly and set to Gershwin tunes. Songs and music include "I Got Rhythm," "I'll Build A Stairway to Paradise," "'S Wonderful," and "Our Love is Here to Stay". The climax is "The American in Paris" ballet, an 18 minute dance featuring Kelly and Caron set to Gershwin's An American in Paris. The ballet alone cost more than $500,000, a staggering sum at the time.

Gene Kelly just can't get enough of France in Vincente Minnelli's musical. Kelly's character, a young painter from the United States who lives above a sidewalk cafe, finds himself involved with two women: the young Leslie Caron and the sophiscated Nina Foch, who wants to be his patron and probably more. But who needs a plot? Kelly's and Caron's dance numbers, the scenery and that gorgeous Gershwin music are enough., The New York Times 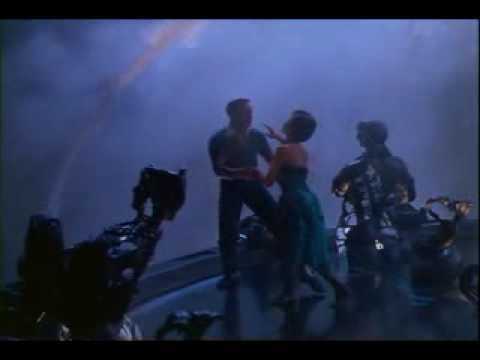