This cartoon was directed by Robert "Bobe" Cannon, and appeared as part of UPA's "Jolly Frolics" series.

What made it stand out from the UPA crowd — and undoubtedly contributed heavily to the fact that it won that year's animation Oscar — is that it was simply an animated version of a children's record written by Dr. Seuss. Seuss's script, which consisted almost entirely of voice-overs and sound effects, was unusual even for that gifted rhymester, in that it not only used polysyllabic sound effects to fill out lines, but even pulled off a few rhymes with them.

The initial outing was followed by a brief series of sequels which, while not quite capturing the unique charm of the original, nonetheless stand as excellent examples of 1950s animation.

The story describes one Gerald McCloy, who at the age of 2 years old begins "talking" in the form of sound effects, his first word being the titular "boing boing." His panicked father calls the doctor, who informs him that there's nothing he can do about it. As the boy grows up, he picks up more sounds and is able to make communicative gestures, but is still incapable of uttering a single word of the English language. Despite this, he is admitted to a general public school, where he is chided by his peers and given the derogatory name "Gerald McBoing-Boing." After startling, and angering, his father, he decides to run away and hop a train to an unknown location. However, just before he catches the train, a talent scout from the NBC Radio Network (as identified by the NBC chimes) discovers him. He is then hired as NBC's foley artist, performing shows for a division of the company labeled "XYZ" on the microphones, and becomes very famous, with the last scene showing him riding with his parents in a very expensive automobile among throngs of fans. 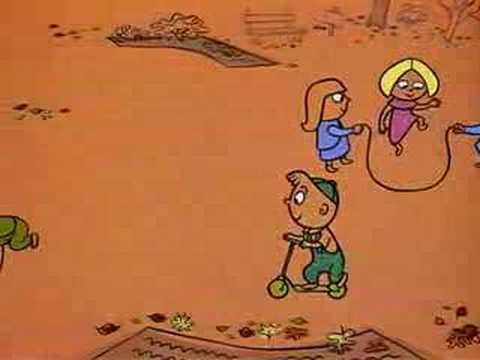