Take Me Out to the Ball Game is a 1949 Technicolor musical film starring Gene Kelly and Frank Sinatra.

The title and nominal theme is taken from the unofficial anthem of American baseball, "Take Me Out to the Ball Game". The movie was released in the United Kingdom as Everybody's Cheering.

Take Me Out to the Ball Game is a period piece set in 1908. The plot revolves around a fictional American League team, the Wolves,[1] and two of its players, Eddie O'Brien (Gene Kelly) and Dennis Ryan (Frank Sinatra), who are also part-time vaudevillians.
The ball club's status quo is turned on its head when the team winds up under new ownership, and the distress this causes the team is only increased when the new owner is revealed to be a woman, K.C. Higgins (Esther Williams). Eventually, Sinatra falls for her, and then Kelly as well, while Sinatra is the object of the affections of an ardent fan, Shirley Delwyn (Betty Garrett). And all of them must contend with a number of gangsters looking to get the team to throw one of its games for a big gambling payoff.

Esther Williams, a star in swimming-themed musicals, did not enjoy her experience filming with star, story-writer and choreographer Gene Kelly. In her autobiography, she describes her time on the film as "pure misery", claiming that Kelly and Stanley Donen treated her with contempt and went out of their way to make jokes at her expense. Williams asserts that Kelly was uncomfortable with the height difference between them, Williams being 5'10", while Kelly was 5'7".
Director Busby Berkeley originally planned a swimming number for Williams, but the idea was rejected by Gene Kelly. Williams did, however, form a strong bond with Frank Sinatra. Williams also claimed that she was not the first choice for the role of club-owner K.C. Higgins: Judy Garland was originally slated to star, but was replaced because of substance abuse problems.[3] Similarly, Sinatra's role of Dennis Ryan was said to have originally been intended for professional baseball player Leo Durocher.

So baseball pictures never make money, eh? Try telling that to MGM, which raked in a box office gross of $4 million on their 1949 baseball musical Take Me Out to the Ball Game. Set in 1906, the film concerns the adventures and misadventures of The Wolves, a champion ball club. The team's success is contingent upon the double-play combination of "O'Brien to Ryan to Goldberg." But while Goldberg (Jules Munshin) lives to play baseball, O'Brien (Gene Kelly) and Ryan (Frank Sinatra) would rather pursue their off-season vaudeville career. Both erstwhile song-and-dance men decide to stick around on the baseball diamond when they mutually fall in love with the Wolves' new owner, the lovely K.C. Higgins (Esther Williams). Though O'Brien wins K.C. for himself, Ryan is compensated with the aggressively affectionate Shirley Delwyn (Betty Garrett). Gambler Joe Lorgan (Edward Arnold), who has bet heavily against the Wolves in an upcoming Big Game, woos O'Brien away from the team with promises of a big role in an upcoming musical comedy. Having let down K.C. and the rest of the team, O'Brien vows to redeem himself by playing in the crucial game. Lorgan gets wind of this, and orders his henchmen to do away with O'Brien. Hoping to shield his buddy from harm, Ryan beans O'Brien with a pitched ball, thereby incapacitating the prodigal player. The crooks are vanquished, and K.C. forgives O'Brien. But upon learning that Ryan had knocked him out, O'Brien charges onto the diamond, thirsting for revenge. Believe it or not, this action results in no fewer than two winning home runs! We offer you this detailed synopsis because it's likely that you'll be too entertained by the film's musical numbers to pay any attention to the story. Outside of the title number and Gene Kelly's solo "The Hat My Father Wore on St. Patrick's Day," the picture's best songs are contributed by Betty Comden, Adolf Green and Roger Edens. Take Me Out to the Ball Game is so delightful as it stands that one can only wonder what the film would have looked like had MGM's first choice Kathryn Grayson--or the studio's second choice, Judy Garland--played the Esther Williams role (In a similar vein, the Frank Sinatra character was originally to have been played by real-life Brooklyn Dodgers manager Leo Durocher!)

Take Me Out to the Ballgame follows Kelly and Sinatra as two baseball players (O’Brien and Ryan) who moonlight as vaudevillians. The film is notable for its seventh inning stretch titular song. Jules Munshin returns to the pair as Goldberg and Betty Garrett makes another appearance, this time as an ardent fan Shirley Delwyn. The pair return to the team and learn that there’s new ownership. The mystery is short-lived when the new owner, K.C. Higgins, turns out to be a lady (played by swimming star Esther Williams). They also run into some trouble when some gamblers want to put in the fix and try to lure O’Brien with the promise of chorus girls. This comes between K.C. and O’Brien’s blooming romance, but there’s still a shot at redemption for him when he attends a Wolves baseball game after being kicked off the team. 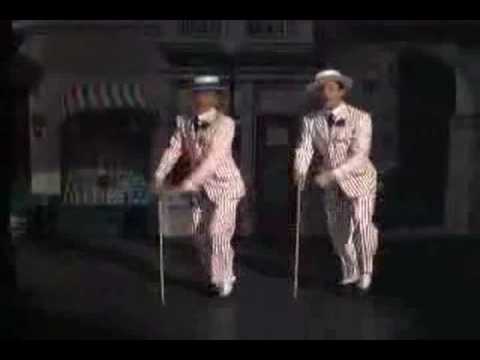 View other events that happened in April 1949