At the end of the war, Soviet authorities forcibly unified members of the Communist Party of Germany and Social Democratic Party in the Socialist Unity Party (SED), which swept to victory in 1946 elections with the help of Soviet pressure and propaganda about the Nazi atrocities. All property and industry was nationalized under their government, and the German Democratic Republic was declared on October 7, 1949, with a new constitution which enshrined socialism and gave the SED power over a National Front among the different political parties, with "unity lists" put forth by the SED which ensured their control. The first leader of East Germany was Wilhelm Pieck, the first (and as it turned out, only) President of the GDR. However, after 1950 the real power rested with Walter Ulbricht, first secretary of the ruling SED.

Until 1952, the GDR consisted of the German states of Mecklenburg-Vorpommern, Brandenburg, Saxony-Anhalt, Thuringia, Saxony and the capital, East Berlin. These divisions roughly corresponded to prewar states (Länder) and provinces (Provinzen) in the area of Eastern Germany administered by the Soviet Union under the terms of the postwar Potsdam Agreement. Two small remnants of states annexed by Poland after the war (Pomerania and Lower Silesia) remained in the GDR and were attached to neighboring territories. In the administrative reform of 1952, the states were abolished and replaced with 14 smaller districts. The districts were named after their capitals: Rostock, Neubrandenburg, Schwerin, Potsdam, Frankfurt (Oder), Magdeburg, Cottbus, Halle, Leipzig, Erfurt, Dresden, Karl-Marx-Stadt (named Chemnitz until 1953 and again after 1990), Gera, and Suhl. East Berlin was recognized as a district in 1961.

On 16 June 1953, following a production quota increase of 10 percent for workers building East Berlin's new boulevard, the Stalinallee (today known as Karl-Marx-Allee), demonstrations by disgruntled workers broke out in East Berlin. The next day the protests spread across East Germany with more than a million on strike and demonstrations in 700 communities. Fearing revolution the government requested the aid of Soviet occupation troops and on the morning of the 18th tanks and soldiers were dispatched who dealt harshly with protesters. The result was some fifty deaths and a wave of arrests and jail sentences numbering over 10,000. Transit between West and East Berlin was relatively free at the time, meaning that the protests and the harsh Soviet reaction unfolded in full view of many western observers. See Uprising of 1953 in East Germany.

Soviet war reparations, extracted entirely from the eastern occupation zone, had a substantial impact on the East German economy. During the early stages of the occupation (in particular 1945 and 1946), the Red Army seized around a third of the industrial equipment from eastern Germany to be shipped back to the Soviet Union, with a further $10bn in reparations extracted by the early 1950s in the form of agricultural and industrial products. The increasing economic prosperity of West Germany led large numbers of East Germans to flee to the West. Since the 1940s, East Germans had been leaving the Soviet zone of Germany to emigrate to the west. The ongoing emigration of East Germans further strained the East German economy. The border between the two German states was largely closed by the mid-1950s (see Inner German border). Due to the lure of higher salaries in the West and the political oppression in the East, many skilled workers (such as doctors) crossed into the West, causing a 'brain drain' in the East. However, on the night of 13 August 1961, East German troops sealed the border between West and East Berlin and started to build the Berlin Wall, literally and physically enclosing West Berlin. Travel was greatly restricted into, and out of, East Germany. The Ministry of State Security (or Stasi), a highly effective security force, monitored the lives of East German citizens to suppress dissenters through its pervasive network of informants and agents.

In 1971, Ulbricht was forced out as head of state under Soviet pressure and replaced by Erich Honecker. Ulbricht had experimented with a few reforms, but Honecker tightened the reins and imposed a new constitution that used the word "German" sparingly and defined the country as a "republic of workers and peasants." Under Honecker, East Germany came to be generally regarded as the most economically advanced member of the Warsaw Pact.

Until the 1970s, West Germany regarded East Germany as an illegally constituted state, and under the Hallstein Doctrine refused to have diplomatic relations with any country (except the Soviet Union) that recognized East Germany as a separate country. In the early 1970s, Ostpolitik led by Willy Brandt led to a form of mutual recognition between East and West Germany. The Treaty of Moscow (August 1970), the Treaty of Warsaw (December 1970), the Four Power Agreement on Berlin (September 1971), the Transit Agreement (May 1972), and the Basic Treaty (December 1972) helped to normalize relations between East and West Germany and led to both German states joining the United Nations.

In 1949 the constitution formally established a democratic federal republic and created the states chamber and the people’s chamber. The third Party Congress in July of 1950 began to emphasize the industrial progress. The industrial sector had employed 40% of the working population, and was subjected to further nationalization, which formed the People’s Enterprises. 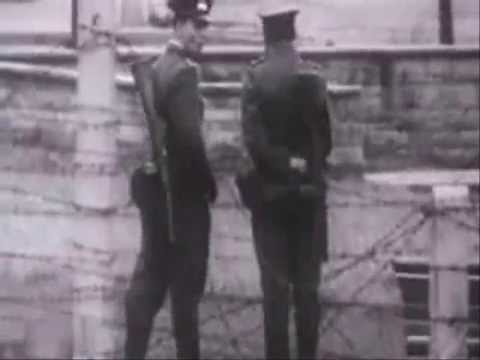