The Porsche 356 was the company's first production automobile.

It was a lightweight and nimble handling rear-engine rear-wheel-drive 2 door sports car available in hardtop and convertible configurations. Design innovations continued during the years of manufacture, contributing to its motorsports success and popularity. Production started in 1948 at Gmünd, Austria where approximately 50 cars were built. In 1950 the factory relocated to Zuffenhausen, Germany and general production of the 356 continued until April 1965, well after the replacement model 911 made its autumn 1963 debut. It is estimated approximately half of the total production of 76,000 356s still survive.

Prior to World War II Porsche designed and built three Type 64 cars for a 1939 Berlin to Rome race that was cancelled. In 1948 the mid-engine tubular chassis 356 prototype called "No. 1" was completed. This has led to some debate as to the "first" Porsche automobile, but the 356 is considered by Porsche to be its first production model.
The 356 was created by Ferdinand "Ferry" Porsche (son of Dr. Ing. Ferdinand Porsche, founder of the company). Like its cousin, the Volkswagen Beetle (which Ferdinand Porsche Senior had designed), the 356 was a four-cylinder, air-cooled, rear-engine, rear-wheel-drive car utilizing unitized pan and body construction. While the 356's body was an original design by Porsche employee Erwin Komenda, its mechanicals (including engine, suspension and chassis) were derived from the Volkswagen. The first 356, was roadcertified in Austria on June 8, 1948, and used many Volkswagen parts for manufacturing economy. Porsche quickly re-engineered and refined the car with a focus on performance. By the late '50s many fewer parts were shared in common between Volkswagen and Porsche. The early 356 automobile bodies produced at Gmünd, Austria were handcrafted in aluminum, but when production moved to Zuffenhausen, Germany in 1950, models produced there were steel-bodied.

Little noticed at its inception, the first 356s sold primarily in Austria and Germany. From the first prototype in 1948, it took Porsche about two years to manufacture the first 50 automobiles. By the early 1950s the 356 had gained some renown among enthusiasts on both sides of the Atlantic for its aerodynamics, handling, and excellent build quality. It was common for owners to race the car as well as drive it on the street. Increasing success with its racing and road cars brought Porsche orders for over 10,000 units in 1964, and when 356 production ended in 1965 approximately 76,000 had been produced.

The basic design of the 356 remained the same throughout its lifespan, with evolutionary, functional improvements rather than yearly superficial styling changes. Nevertheless a variety of models in both coupe and convertible forms were produced from 1948 through 1965.

Cabriolets (convertibles) were offered from the start, and in the early 1950s sometimes comprised over 50% of total production. One of the most desirable collector models is the 356 "Speedster", introduced in late 1954 after Max Hoffman, the sole US importer of Porsches, advised the company that a lower-cost, open-top version could sell well in the American market. With its low, raked windshield (which could be removed for weekend racing), bucket seats and minimal folding top, the Speedster was an instant hit, especially in Southern California. Production of the Speedster peaked at 1,171 cars in 1957 and then started to decline. It was replaced in late 1958 by the "Convertible D" model. It featured a taller, more practical windshield, glass side windows and more comfortable seats. The following year the 356B "Roadster" convertible replaced the D model but the sports car market's love affair with top-down motoring was fading; soft-top 356 model sales declined significantly in the early 60s.

To distinguish among the major revisions of the model, 356's are generally classified into a few major groups. 356 coupes and "cabriolets" (soft-top) built through 1954 are readily identifiable by their split (1948 to 1952) or bent (center-creased, 1953 to 1954) windshields. In 1955, with numerous small but significant changes, the 356A was introduced. Its internal factory designation, "Type 1," gave rise to its nickname "T1" among enthusiasts. In early 1957 a second revision of the 356A was produced, known as Type 2 (or T2). In late 1959 more significant styling and technical refinements gave rise to the 356B (a T5 body type).

The mid 1962 356B model was changed to the T6 body type (twin deck lid grilles, an external fuel filler in the right front fender and larger windows). A unique "Karmann Hardtop" or "Notchback" 356B model (1961 to 1962) was essentially a cabriolet body with the optional steel cabriolet hardtop welded in place.

The last revision of the 356 was the 356C which was introduced for the 1964 model year. It featured disc brakes as well as an option for the most powerful pushrod engine Porsche had ever produced, the 95 hp (71 kW) "SC." 356 production peaked at 14,151 cars in 1964, the year that its successor, the new 911, was introduced to the US market (it was introduced slightly earlier in Europe). The company continued to sell the 356C in North America through 1965 as demand for the model remained quite strong in the early days of the 911. The last ten 356's (cabriolets) were assembled for the Dutch police force in March 1966 as 1965 models.

The 356's four-cylinder pushrod engine was later re-introduced in Porsche's "entry-level" 912 model, offered between 1965 and 1969 in response to customer complaints that the new 911 (at nearly twice the price of the 356) was too expensive. Although in some ways the 912 did reprise the 356's specifications, it would not be accurate to say the 912 was successor to the 356; when the decision was made to replace the 356, the 911 was the only car intended to carry the Porsche name forward. Rather the 912 was an afterthought intended to supply the lower-priced end of the market, which the faster and heavier 911 could not do.

The 356 has always been popular with the motor press. In 2004, Sports Car International ranked the 356C tenth on their list of Top Sports Cars of the 1960s. Today, the Porsche 356 is a highly-regarded collector car. The Porsche 356 Carrera (with its special four-cam racing engine), Super 90 and Speedster models are today among the most desirable 356 models. Few 356 Carreras were produced and these often bring well over $250,000 at auction. A fully-restored 356 Carrera Speedster (of which only about 140 were ever made) will sell for around $300,000 at auction.

Thousands of owners worldwide maintain the 356 tradition, preserving their cars and driving them regularly. The US-based 356 Registry is the largest American club.

According to Autozeitung magazine, a new generation of Porsche 356 will be produced in 2013.

Bill Crutchfield started his eponymous aftermarket car stereo business after he was unable to find help upgrading the car stereo on a 356.
Janis Joplin drove an orange Porsche 356 convertible that was almost covered entirely by a mural.

Perceived as a rather dumpy-looking rear-engined sports car, the 356 was modelled on the VW Beetle which was also designed by Ferdinand Porsche.

Early editions of the 356 had split windscreens and an 1100cc flat four motor that produced a mere 40 bhp.

The power to weight ratio was obviously more important then than readily available horsepower. While the target weight of 555kg was never achieved, the original 356 only weighed in at a mere 600kg!

The first prototype of the 356 was completed in the European spring of 1948 - however production would not commence until 1950. The first 1000 356's were sold by August the following year!

Later models used 1287, 1290 and 1488cc motors that produced up to 70 bhp. In 1955 its roundish styling was sharpened somewhat with the introduction of the 356A that also boasted a curvy one-piece windscreen, better front suspension and a 1600cc engine. In 1959 the 356B was higher in its nose and existed in two versions - Roadster and coupe.

The top of the range was the Super 90 which could top 177 km/h, whilst other models could credibly manage 160 km/h. The 356C had four-wheel disc brakes and ZF steering was used.

Names were altered as well with the Super changing to the 1600C, the Super 75 becoming the 1600S and the Super 90 was known as the 1600SC. Carrera versions of the 356 existed from 1955 using familiar flat four motors but differing in details.

Because of its lighter body these 100 bhp vehicles could manage 193 km/h with the 1958 models that used 1.6 litre engines managing with a fantastic 193 km/h.

The Carrera 2 cars from 1960 used a two litre type of complex flat four that allowed 155 bhp. Over time the 356 changed dramatically causing it to move away from the VW Beetle influence. Compact and beautifully made its passing was mourned by many when Porsche 911 took over in 1965.

This Porsche 356 is the very first real Porsche car created by Ferdinand 'Ferry' Porsche. This prototype two seater open roadster, known as 'Porsche Number 1,' has a mid-mounted, air-cooled flat-4 engine displacing 1,131cc. While the body was an original design, most of the mechanicals including engine and suspension were derived from the Volkswagen Beetle, which Ferry's father, Ferdinand Porsche, had designed. The aluminum roadster body of this car was designed by Porsche employee Erwin Komenda in April 1948 and was completed in just one month. Smooth and low, Porsche Number 1 set the pattern for later 356s with one fundamental difference, the engine of the production cars was moved behind the rear axle to reduce costs and make room for two additional seats.

Here's a very rough timeline of the development of the 356, compiled from a variety of sources. "Driving in it's Purest Form", "Excellence was Expected", "Speedster" and "Porsche : 356 & Rs Spyders" are all recommended for the Porsche 356 enthusiast and those interested in the Porsche history 1948-1966. See also the Porsche North America corporate website from which much of the below material came. The student of Porsche and 356 history is strongly encouraged to seek out the above books for a detailed history of the car, the company and the amazing individuals who brought us the 356.

1948: Gmünd, Austria. The Porsche Firm, having located to Austria just after the war to be closer to parts suppliers, turns out a variety of automotive, farm and industrial motors and tools for the war-ravaged western europe. Ferry Porsche (son of the famous Dr. Ing Ferdinand Porsche, founder of Porsche motors) designed and fabricates the first Project #356 car, model 356-001. The car utilized a tubular chassis, an 1100cc engine and was very light and so quick for the time. Karl Frolich was the gearbox and suspension specialist contributing to the handling of the prototype. Ferry Porsche often took the prototype--sometimes just the rolling chassis without body--up the steep mountain roads surrounding Gmünd and found the car a spright handler and good climber.

The body of the car was designed by Irwin Komenda. Kommenda, an Austrian born in 1904, contributed substantially to the Volkswagen, Cistalia, Auto Union racers and other cars of the day. Though the car changed from mid-engine to rear, the tubular chassis gave way to a unitized pan and body construction, and a myriad of details evolved over the 22 year run of the model, the overall design and instantly recognizeable shape of the car remained the same, a timeless classic. Komenda joined Porsche's design bureau in 1931 after positions at Steyr and Daimler-Benz and other coach shops in Austria and Germany. Komenda contributed to many other designs in Porsche's history and was the chief engineer and head of Porsche's coach werk from 1955 until his death in 1966.

Karl Peter-Rabe was the "confidential clerk" for Porsche, and became the chief business manager, after Prizing, until 1965. Dr. Ing Albert Prizing was a business manager who brought 37 orders back to the factory after one importer's conference in Wolfsberg in 1950.

The original 356-001 car is raced at the Innsbruck city race, achieiving a victory in the 1100cc class in its first outing. Porsche was homologated by the state government of Kärnten in Austria on 8 June 1948. Above and below photos courtesy of the Porsche archives. The original Porsche "001" car is in the Factory Meuseum and frequently tours the world for special car shows and historic events. 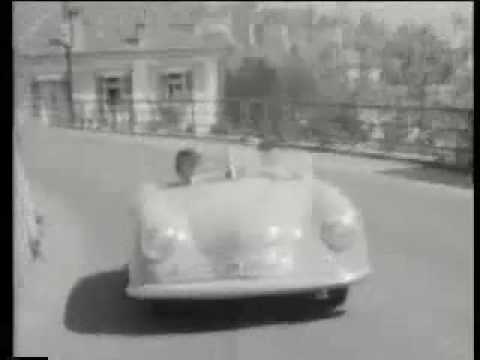 View other events that happened in 1948