During the winter of 1947-48, both in the cabinet and in parliament tension between the Communists and their opponents led to increasingly bitter conflict.

In early February 1948, the Communist minister of the interior, Václav Nosek, illegally extended his powers by attempting to purge remaining non-Communist elements in the National Police Force; the security apparatus and police were being transformed into instruments of the KSČ, endangering basic civic freedoms. On February 12, the non-Communists in the cabinet demanded punishment for the offending Communists in the government and an end to this subversion but Nosek, backed by Gottwald, refused; he and his fellow Communists threatened to use force and, in order to avoid defeat in parliament, mobilised groups of their supporters in the country. On February 21, twelve non-Communist ministers resigned in protest after Nosek refused to reinstate eight non-Communist senior police officers despite a majority vote of the cabinet in favour of doing so. They assumed that President Beneš would refuse to accept their resignations, keeping them in a caretaker government and in the process embarrassing the Communists enough to make them yield. Beneš initially insisted that no new government could be formed which did not include ministers from the non-Communist parties. However, an atmosphere of mounting tension, coupled with massive Communist-led demonstrations occurring throughout the country, convinced Beneš to remain neutral over the issue, for fear the KSČ foment an insurrection and give the Red Army a pretext to invade the country and restore order. Had Beneš held his line, Gottwald's ministers would not have been able to form a government, the only non-violent means of crisis resolution being to give way to the non-Communists or to risk defeat in early elections which the KSČ did not have time to rig. The non-Communists saw this as a moment of opportunity, needing to act quickly before the interior ministry had total control over the police and hampered the free electoral process.

While the non-Communist ministers seemed to behave as if this was just an old-fashioned pre-1939 governmental crisis, the Communists were mobilizing from below. To help them do this the Soviet Ambassador, Valerian Zorin, arrived in Prague to arrange a coup. Armed militia and police took over Prague; Communist demonstrations were mounted; an anti-Communist student demonstration was broken up. The ministries of the non-Communist ministers were occupied, civil servants dismissed and the ministers prevented from entering their own ministries. The army was confined to barracks and did not interfere.[5] Communist "Action Committees" and trade union militias were quickly set up, armed, and sent into the streets, as well as being prepared to carry through a purge of anti-Communists. In a speech before 100,000 of these people, Gottwald threatened a general strike unless Beneš agreed to form a new Communist-dominated government. Zorin at one point offered the services of the Red Army, camped on the country's borders, but Gottwald declined the offer, understanding that the threat of violence combined with heavy political pressure was enough to force Beneš to act according to plan. As he said after the coup, Beneš "knows what strength is, and this led him to evaluate this [situation] realistically".[3]

On February 25, 1948, Beneš, fearful of civil war and Soviet intervention, capitulated and appointed a KSČ-dominated government under Gottwald's leadership; this was sworn in two days later. The only important portfolio held by a non-Communist was foreign affairs, which went to Jan Masaryk, who was however found dead two weeks later.[6] (The presence of Masaryk and a few other non-Communists gave the government the façade of being a National Front.) Consumed by these events, Beneš resigned in June and was succeeded by Gottwald. He died in September, bringing a symbolic close to the sequence of events, and was buried before an enormous and silent throng come to mourn the passing of a popular leader and of the democracy he had come to represent.

Many important issues were discussed amongst the Allied leaders during the wartime conferences of World War II. Unfortunately, many of the agreements made at these historic conferences were broken in the postwar years. The events that led up to the Czechoslovakian coup of 1948 exemplifies this sad fact perfectly.

Eastern Europe became an issue for the Allied leaders to discuss when the Soviet army began to occupy this area in 1944. Many proposals of how these states would be administered were considered. One plan was Winston Churchill's, which called for the region to be divided into spheres of influence similar to how Germany was divided. Churchill was also a proponent of the plan to allow the governments-in-exile of these nations (that were operating in London at the time) to return to power in their homeland once the war was over. 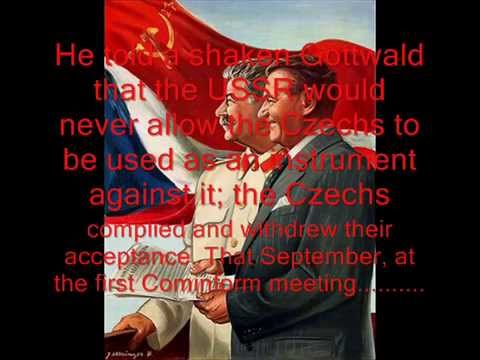