The Texas City disaster of April 16, 1947 was the deadliest industrial accident in U.S. history, and one of the largest non-nuclear explosions.

Originating with a mid-morning fire on board the French-registered vessel SS Grandcamp (docked in the Port of Texas City), its cargo of approximately 2,300 tons (approximately 2,100 metric tons) of ammonium nitrate detonated, with the initial blast and subsequent chain-reaction of further fires and explosions in other ships and nearby oil-storage facilities killing at least 581 people, including all but one member of the Texas City fire department. The disaster triggered the first ever class action lawsuit against the United States government, under the then-recently enacted Federal Tort Claims Act (FTCA), on behalf of 8,485 victims.

The 32.5% ammonium nitrate, used as fertilizer and in high explosives, was manufactured in Nebraska and Iowa and shipped to Texas City by rail before being loaded on the Grandcamp.

It was manufactured in a patented explosives process, mixed with clay, petrolatum, rosin and paraffin to avoid moisture caking. It was also packaged in paper sacks, then transported and stored at temperatures that increased its chemical activity. Longshoremen reported the bags were warm to the touch prior to loading.

Around 08:10, smoke was spotted in the cargo hold of the Grandcamp. Attempts at control failed as a red glow returned after each effort.

Shortly before 9:00 AM, the Captain ordered his men to steam the hold, a firefighting method where steam is piped in to put out fires in the hope of preserving the cargo. Meanwhile, the fire had attracted a crowd of spectators along the shoreline, who believed they were a safe distance away. Spectators noted that the water around the ship was already boiling from the heat, an indication of runaway chemical reactions. The cargo hold and deck began to bulge as the forces increased inside.

At 09:12, the ammonium nitrate reached an explosive threshold and the vessel then detonated, causing great destruction and damage throughout the port. The tremendous blast sent a 15-foot (4.5 m) wave that was detectable over nearly 100 miles (160 km) of the Texas shoreline. The blast leveled nearly 1,000 buildings on land. The Grandcamp explosion destroyed the Monsanto Chemical Company plant and resulted in ignition of refineries and chemical tanks on the waterfront. Falling bales of burning twine added to the damage while the Grandcamp's anchor was hurled across the city. Sightseeing airplanes flying nearby had their wings shorn off , forcing them out of the sky. Ten miles away, people in Galveston were forced to their knees; windows were shattered in Houston, Texas, 40 miles (60 km) away. People felt the shock 250 miles (400 km) away in Louisiana. The explosion blew almost 6,350 tons of the ship's steel into the air, some at supersonic speed. Official casualty estimates came to a total of 567, but many victims were burned to ashes or literally blown to bits, and the official total is believed to be an underestimate. The entire volunteer fire department of Texas City was killed in the initial explosion, and with the fires raging, first responders from other areas were initially unable to reach the site of the disaster.

The first explosion ignited ammonium nitrate cargo in the High Flyer. The crews spent hours attempting to cut the High Flyer free from its anchor and other obstacles, but without success. After smoke had been pouring out of its hold for over five hours, and about fifteen hours after the explosions aboard the Grandcamp, the High Flyer blew up demolishing the nearby SS Wilson B. Keene, killing at least two more people and increasing the damage to the port and other ships with more shrapnel and fire.

The ammonium nitrate onboard the Grandcamp detonated at 9:12 AM, rupturing the ship and sending the cargo of peanuts, tobacco, twine, bunker oil and the remaining bags of ammonium nitrate 2,000 to 3,000 feet into the air. Fireballs streaked across the sky and could be seen for miles across Galveston Bay as molten ship fragments erupted out of the pier. The blast caused a fifteen-foot tidal wave that crashed onto the dock and flooded the surrounding area. Windows were shattered in Houston, 40 miles to the north, and people in Louisiana felt the shock 250 miles away. Most of the buildings closest to the blast were flattened, and there were many more that had doors and roofs blown off. The Monsanto plant, only three hundred feet away, was destroyed by the blast. 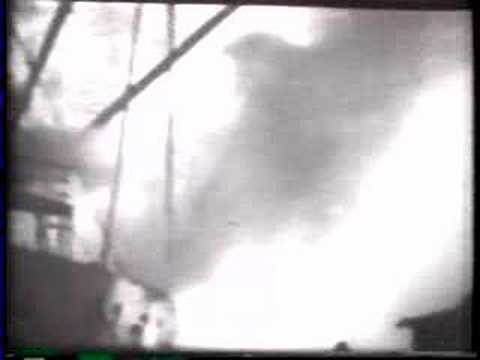 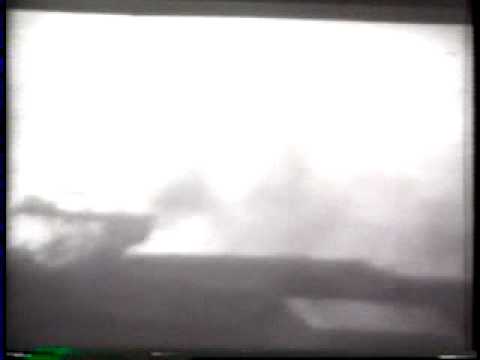