After his release, Capone spent a short time in the hospital.

He returned to his home in Palm Island where the rest of his life was relaxed and quiet. His mind and body continued to deteriorate so that he could no longer run the outfit. On January 21, 1947, he had an apoplectic stoke that was probably unrelated to his syphilis. He regained consciousness and began to improve until pneumonia set in on January 24. He died the next day from cardiac arrest. Capone was first buried in Mount Olivet Cemetery in Chicago's far South Side between the graves of his father, Gabriele, and brother, Frank, but in March of 1950 the remains of all three were moved to Mount Carmel Cemetery on the far West Side.

Capone's control and interests within organized crime diminished rapidly after his imprisonment, and he was no longer able to run the Outfit after his release. He had lost weight, and his physical and mental health had deteriorated under the effects of neurosyphilis. He often raved on about Communists, foreigners, and George Moran, who he was convinced was still plotting to kill him from his Ohio prison cell.

On January 21, 1947, Capone had an apoplectic stroke. He regained consciousness and started to improve but contracted pneumonia on January 24. He suffered a fatal cardiac arrest the next day.

Capone was buried in Mount Olivet Cemetery, in Chicago's far South Side between the graves of his father, Gabriele, and brother, Frank. However, in March 1950, the remains of all three family members were moved to Mount Carmel Cemetery in Hillside, Illinois, west of Chicago.

When his health deteriorated he would be wheeled around in a wheelchair and brought to the dock of his Florida mansion for fresh air. He would be immediately brought in as sightseers approached the dock. He would play cards with old associates and thought he was still in charge. Most of his fellow mobsters would appease the big fellow by obliging his winning the card game. Near the end he was confined to a room * with two seperate beds, one being for Mae, and one for Al . He suffered from pneumonia,but seemed to get better near his birthday. At the end he succumbed to a stroke brought on by the syphillis on January 25th,1947 at 7:30 pm. 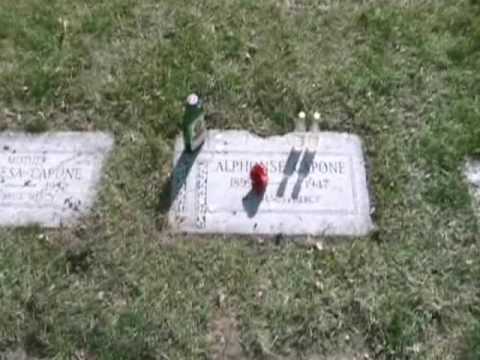