The Greek Civil War (Greek: ο Eμφύλιος [Πόλεμος], "the Civil War") was fought from 1946 to 1949 between the Greek governmental army, backed by Britain and the USA, and the Democratic Army of Greece (DSE), the military branch of the Greek Communist Party (KKE). It was the result of a highly polarized struggle between leftists and rightists which started from 1943 and targeted the power vacuum that the German occupation during World War II had created. One of the first conflicts of the Cold War, according to some analysts it represents the first example of a postwar Western interference in the internal politics of a foreign country, and for others, marked the first serious test of the theory of the so called Churchill-Stalin percentages agreement.

The first phase of the civil war occurred in 1942–1944, during the Occupation. With the Greek government in exile unable to influence the situation at home, various resistance groups of differing political affiliations emerged, the dominant one being the leftist National Liberation Front (EAM), controlled effectively by the Communists. Starting in autumn 1943, friction among EAM and the other resistance groups resulted in scattered clashes, which continued until the spring of 1944, when an agreement was reached forming a national unity government which included six EAM-affiliated ministers. The second phase occurred in December 1944, after the country had been liberated. EAM, in military control of most of Greece, confronted the British-backed government, and tried to wrest control of the capital, Athens. The defeat of EAM forces spelled the end of its ascendancy: ELAS was disarmed, and EAM continued as its political action as a multi-party organization. Tensions remained high however, as clashes between right and left-wing factions continued. In the third phase (1946–1949), guerrilla forces controlled by the KKE, having a political and logistic back up by the newly founded northern Socialist States (Albania, Yugoslavia, Bulgaria and USSR) fought against the internationally recognized Greek government which was formed after elections boycotted by KKE. Despite initial failures by the government forces from 1946 until 1948, increased American aid, lack of high numbers of recruits to the ranks of DSE and the side-effects of the Tito–Stalin split, led to their defeat.

The final victory of the Western-supported government forces led to Greece's membership in NATO, and helped to define the ideological balance of power in the Aegean for the entire Cold War. The civil war also left Greece with a vehemently anti-Communist security establishment, which would lead to the establishment of a military regime, and a legacy of political polarization which lasted until the 1980s.

With this political instability in Greece during the early twentieth century, General Ioannis Metaxas took power with a fascist-style dictatorship. Once Metaxas died in 1941, Greece was left powerless and the Communist Party took control and created the National Liberation Front, also called the EAM. Another group was formed that was against the EAM called the National Republican Greek League (EDES). The EAM and EDES fought each other in the winter of 1943-1944. The EDES received help from the British since Britain was worried about a communist takeover. Winston Churchill met with Joseph Stalin in 1944. Churchill agreed to give Stalin power in Romania if Stalin gave Churchill power in Greece. The Germans, still there from World War II, began to withdraw from Greece because of this and Stalin gave no help to the communists, even though they were the powerful group in Greece. On December 2, 1944, fighting started between the British and the EAM. The nationalists won and the size of the Communist party greatly decreased. 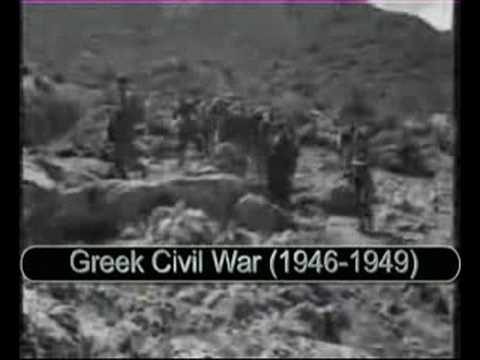 View other events that happened in March 1946