When Sinatra returned to the Paramount in October 1944, 35,000 fans caused a near riot outside the venue because they were not allowed in.

In 1945, Sinatra co-starred with Gene Kelly in Anchors Aweigh. That same year, he was loaned out to RKO to star in a short film titled The House I Live In. Directed by Mervyn LeRoy, this film on tolerance and racial equality earned a special Academy Award shared among Sinatra and those who brought the film to the screen, along with a special Golden Globe for "Promoting Good Will."

Anchors Aweigh is a 1945 musical comedy live-action/animated film, directed by George Sidney in which two sailors go on a four-day shore leave in Hollywood, accompanied by music and song, meet an aspiring young singer and try to help her get an audition at MGM. It stars Frank Sinatra, Gene Kelly, Kathryn Grayson, José Iturbi, Pamela Britton, Dean Stockwell, and Sharon McManus.

The movie was written by Natalie Marcin and Isobel Lennart and directed by George Sidney. It was the first in a series of buddy pictures teaming the cocky dancing Kelly with the (against type) shy singing Sinatra, which culminated in 1949 with On the Town. The production tried to mix some of the more successful story elements and set-pieces from earlier MGM musical hits, such as Meet Me in St. Louis.
It won the Academy Award for Best Music, Scoring of a Musical Picture, which was received by the musical director Georgie Stoll. In 2001, Kevin Spacey purchased this Oscar statuette at a Butterfield & Butterfield estate auction and returned it to the Academy of Motion Picture Arts and Sciences. Anchors Aweigh was also nominated for Best Actor in a Leading Role (Gene Kelly), Best Cinematography, Color (Robert Planck, Charles P. Boyle), Best Music, Song (for Jule Styne (music) and Sammy Cahn (lyrics) for "I Fall in Love Too Easily") and Best Picture. 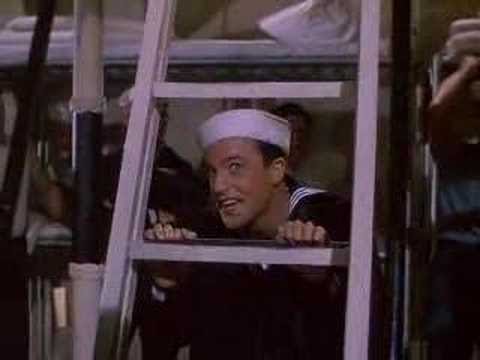 View other events that happened in 1945