Branch Rickey, president and general manager of the Brooklyn Dodgers signs Jackie Robinson to a contract and assigns him to the team's International League farm club, the Montreal Royals.

Robinson would be the first black baseball player in the International League since at least 1890.

The Dodgers signed Jackie Robinson to a contract after the 1945 season when he hit .387 for the Kansas City Monarchs of the Negro League. Robinson spent one season in AAA ball playing for Montreal and then the Dodgers purchased his contract on April 10, 1947 and brought him up to the major leagues. Robinson's first game in MLB for the Dodgers was April 15, 1947 against the Boston Braves.

When he began playing for the Dodgers in 1947, at age 28, Jackie Robinson was older than the typical rookie. Baseball fans and players reacted to Robinson with everything from unbridled enthusiasm evident in newspaper headlines, to wariness and open hostility expressed in beanball pitches and death threats. His athletic abilities prevailed despite the intense pressures caused by breaking the "color line." Robinson won respect and became a symbol of black opportunity. The Sporting News, which had opposed blacks in the major leagues, gave Robinson its first Rookie of the Year Award in 1947. The award was renamed in Robinson's honor in 1987. 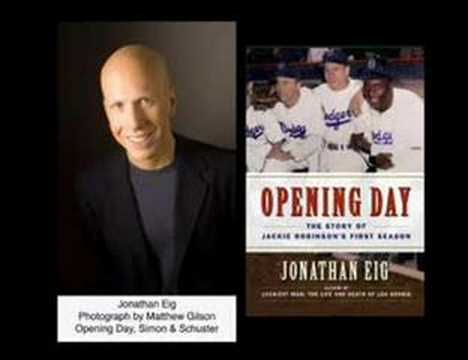