The Potsdam Conference is Held at Cecilienhof

The Potsdam Conference was held at Cecilienhof, the home of Crown Prince Wilhelm Hohenzollern, in Potsdam, occupied Germany, from July 16 to August 2, 1945.

The participants were the Soviet Union, the United Kingdom, and the United States. The three nations were represented by Communist Party General Secretary Joseph Stalin, Prime Minister Winston Churchill and later Clement Attlee, and President Harry S Truman. Stalin, Churchill, and Truman—as well as Attlee, who replaced Churchill as Prime Minister after the Labour Party's victory over the Conservatives in the 1945 general election—had gathered to decide how to administer punishment to the defeated Nazi Germany, which had agreed to unconditional surrender nine weeks earlier, on May 8 (V-E Day). The goals of the conference also included the establishment of post-war order, peace treaties issues, and countering the effects of war.

On May 8, 1945, the Allies accepted German surrender terms at the conclusion of the European conflict of World War II. A new job to Harry Truman, the presidency had been one long struggle after another and he quickly nicknamed the White House the "Great White Jail." The focus of the United States was now on the Pacific as Americans were storming the beaches of Iwo Jima and Okinawa. By June, with these victories secure, the United States was in air striking distance of the Japanese mainland. It would only be a matter of time (August 15) before the Soviets planned to enter the war. Bombing raids coupled with a naval blockade had begun to decimate the Japanese population. Still, the Japanese resolve was hardened, even resolved to fight to the end. The war was nearing an end, but heavy costs of man and might would be incured to secure peace. 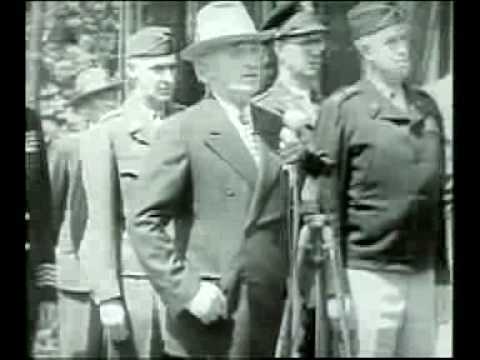