Founding of the United Nations

US President Franklin Delano Roosevelt first suggested using the name United Nations to refer to wartime Allies.Roosevelt suggested the term to Winston Churchill who cited Byron's use of the phrase "united nations" in Childe Harold's Pilgrimage, which referred to the Allies at the Battle of Waterloo in 1815. Franklin Roosevelt adopted the name and the first official use of the term occurred on January 1, 1942 with the Declaration by the United Nations.

During subsequent phases of World War II the Allies used the term "United Nations" to refer to their alliance.

The idea for the future United Nations as an international organization emerged in declarations signed at the wartime Allied conferences in Moscow and in Tehran in 1943.

From August to October 1944, representatives of France, the Republic of China, the United Kingdom, the United States, and the USSR met to elaborate plans at the Dumbarton Oaks Conference in Washington, D.C. Those and later talks produced proposals outlining the purposes of the United Nations Organization, its membership and organs, as well as arrangements to maintain international peace and security and international economic and social cooperation. Governments and private citizens worldwide discussed and debated these proposals.

At the Yalta Conference it was agreed that membership would be open to nations that had joined the Allies by 1st March 1945. Brazil, Syria and a number of other countries qualified for membership by declarations of war on either Germany or Japan in the first three months of 1945 - in some cases retrospectively.

FORTY-FIVE NATIONS, including the four sponsors, were originally invited to the San Francisco Conference: nations which had declared war on Germany and Japan and had subscribed to the United Nations Declaration. One of these, Poland, did not attend because the composition of her new government was not announced until too late for the conference. Therefore, a space was left for the signature of Poland, one of the original signatories of the United Nations Declaration. At the time of the conference there was no generally recognized Polish Government, but on June 28 such a government was announced and on October 15, 1945 Poland signed the Charter, thus becoming one of the original Members. 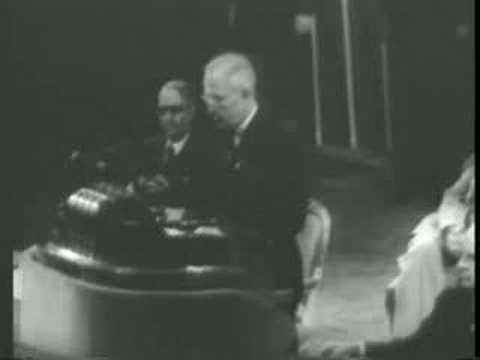