Operation Perch was a Second World War British offensive that took place between 7–14 June 1944, during the Battle of Normandy.

The offensive was intended to encircle and seize the German occupied city of Caen, which was a major Allied objective in the early stages of the invasion of northwest Europe. A combination of fierce German resistance and failures at the British command level foiled the operation before its objectives were achieved.

Meanwhile, to the west, American pressure had opened up a gap in the German lines. In an attempt to keep operations mobile the 7th Armoured Division was diverted from the combat around Tilly-sur-Seulles and ordered to advance through the gap in a flanking manoeuvre intended to force the Germans to fall back. After two days of intense fighting that included the Battle of Villers-Bocage, on 14 June the division's position was judged untenable and it was withdrawn. Plans were made to resume the offensive once 7th Armoured had been reinforced, but these were dropped when a severe storm in the English Channel seriously disrupted allied supply operations.

Both the decision to exploit the gap and the handling of the subsequent battle have been subjects of controversy. Historians generally agree that, because of failures at the British divisional and corps command levels, an early opportunity to capture Caen was squandered. However, to contain the offensive the Germans had been forced to commit their most powerful armoured reserves in a defensive role, in which they incurred heavy losses and were incapable of counteroffensive operations.

The British beaches were not so extensively flooded as Utah, and the British had a more extensive road system available. Their major objective was to capture Caen (Ambrose 515). At Gold and Sword, once men were over the seawall and across the antitank ditch, they were in paved village streets. Once through two or three blocks, they were out in the wheat fields. These fields were very large. 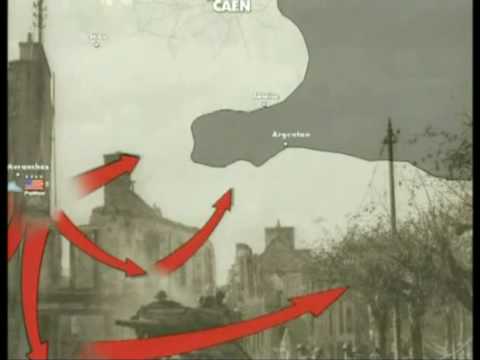