The day began as any other in wartime Hawaii with a gentle westerly breeze wafting across the sugar cane fields of the sunbasked Waipio Peninsula. Warmer than normal for mid-May, the usual parade of camouflaged warships steaming in and out of Waipio's teeming West Loch anchorage was absent on this quiet Sunday, 21 May 1944. Aboard the dozens of amphibious vessels crowded within this bustling anchorage, most soldiers, sailors and marines looked forward to a day of relaxation after a long week of endless drills, maneuvers and practice amphibious landings.

Pearl Harbor is divided into a series of lochs that fan out from Ford Island that sits in the center of harbor. West Loch was the staging area for the invasion fleets of the Pacific. In particular, vessels called LSTs or LCTs that had the capability to land on the shore, open their bows and deposit troops, stores and vehicles on the beach.

On Sunday morning, May 21, 1944, 29 LSTs readied for the invasion of Saipan, were nestled together at six berths. An LST carried a crew of 119 men and 200 marines, trucks, jeeps, and weapon carriers were carried on the main decks, all of which were loaded with ammunition and gas. Each vessel carried 80 to 100 drums of high-octane fuel on forecastle. Six thousand cubic feet of cargo ammunition was stowed on the deck with field guns and amphibious craft known as DUKWs. Besides the stores carried on by the troops and their vehicles, the ship had its own magazine and fuel capacity of 200,000 gallons. Drums of lubricating oil, fog oil smoke pots and floats were carried on the fantail -- an accident waiting to happen.

On May 21, 1944, at 3:08 p.m., an explosion blossomed out of LST-353. Apparently the blast originated near the bow of LST-963, where Army troops had been unloading mortar ammunition. Red hot fragments showered the clustered LSTs, igniting gasoline drums lined up on the exposed forecastles. In minutes, the explosions began to rip the invasion fleet apart. Fires began to blaze from stem to stern.

The explosions continued, damaging more than 20 buildings shoreside at the West Loch facility. For 24 hours fires raged aboard the stricken ships. 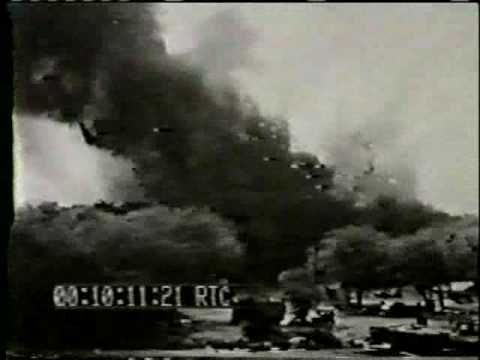