In November 1943, the German 117th Jäger Division began a mission named Unternehmen Kalavryta (Operation Kalavryta), intending to encircle Greek guerilla fighters in the mountainous area surrounding Kalavryta. During the operations, some German soldiers were killed and 77 of them, who were taken prisoners, were executed by the Greek guerillas. The Command of the German division decided to react with harsh and massive reprisal operations.

The reprisals began from the coastal area of Achaea in Northern Peloponnese, Wehrmacht troops marched to the town of Kalavryta burning villages and murdering civilians on their way. When they reached the town they locked all women and children younger than 14 in the town's school and ordered all male residents 16 and older to a field just outside the village. There, the German troops machine-gunned down 499 of them. There were only 12 survivors. Allegedly, the women and children managed to free themselves from the school while the town was set ablaze. The following day the Nazi troops burnt down the Monastery of Agia Lavra, a landmark of the Greek War of Independence.

In total, 677 civilians were killed during the reprisal operations. About 1.000 houses were looted and burned and more than 2.000 sheeps and other large domestic animals were seized by the Germans.

Today the Place of Sacrifice is kept as a memorial site and the events are commemorated each year. Despite the fact that the Federal Republic of Germany has publicly acknowledged the Nazi atrocity at Kalavryta, war reparations have yet to be paid. On 18 April 2000, the then-president of the Federal Republic of Germany, Johannes Rau, visited the town of Kalavryta to express his feelings of shame and deep sorr

The massacre at Kalavryta was one of retaliation. Guerillas resisted Germans in northern Peloponnesus, where 78 men from a German division were killed and took others captive. As a result, The Germans raided several Greek villages trying to find their prisoners and seek revenge. In December of 1943 they arrived at Kalavryta and asked the whole village to meet at the schoolhouse with some food. The town complied; some believing it was an evacuation. 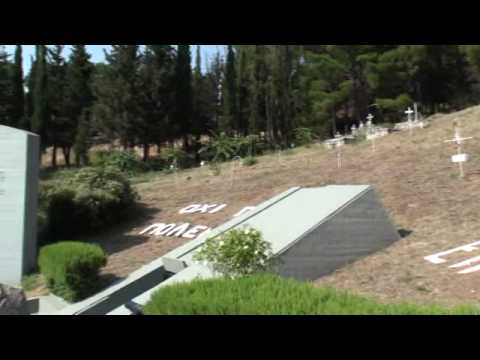