Norma Jeane entered Van Nuys High School in September of 1941, but her days as a typical high-school girl were numbered.

At about that time, Doc Goddard received a job promotion that required him to relocate his family to West Virginia. At some point it was determined that Norma Jeane would not make the move with the Goddards, and that 61-year-old Aunt Ana could no longer take care of her.

Grace decided that a convenient solution to all involved would be Norma Jeane's marriage to a local boy, 21-year-old Jim Dougherty. The only alternative, according to Grace, would be to send Norma Jeane back to the orphanage.

The Doughertys lived in the same neighborhood as the Goddards, and young Jim sometimes drove Norma Jeane and Eleanor "Bebe" Goddard home from school. Norma Jeane harbored a crush on Jim, who had been a football star and student body president at Van Nuys High School.

In The Secret Happiness of Marilyn Monroe and To Norma Jeane with Love, Jimmie, he wrote that they were in love but dreams of stardom lured her away. She always maintained theirs was a marriage of convenience. She was furious when he claimed to Photoplay in 1953 she threatened to jump off the Santa Monica Pier if he left her. He later appeared on To Tell the Truth as "Marilyn Monroe's real first husband." He sold signed copies of his books on his website

On June 19, 1942 she wed her 21-year-old neighbor Jimmy Dougherty, whom she had been dating for six months. "She was a sweet, generous and religious girl," Jimmy said. "She liked to be cuddled." By all accounts Norma Jeane loved Jimmy, and they were happy together until he joined the Merchant Marines and was sent to the South Pacific in 1944. 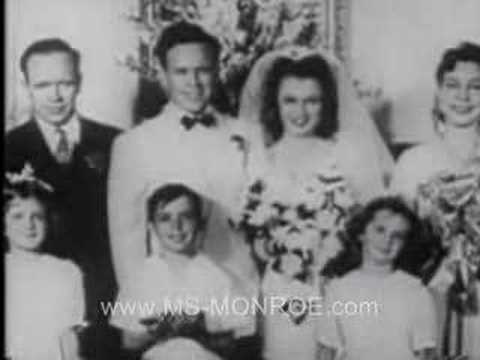