Murrow lined up nine commentators, with the help of the BBC, and set them up all over London with mics.

The first commentator heard on London After Dark was none other than Edward Murrow himself. He broadcast live from Trafalgar Square in London, a broadcast now world-famous. "This is Trafalgar Square. The noise you hear at the moment is the sound of the air-raid siren," Murrow said as he calmly described the scene.

From the square that first program moved on to Robert Bowman who was stationed in the kitchen of the Savoy Hotel. Bowman described the menu, eight hors d'oeuvres and eight different kinds of meat and talked to famed Chef François Latry. The atmosphere at the Savoy was seemingly joyous.

The program then jumped to an anti-aircraft battery and then to and Air Raid Precautions Station. Then, onto Hammersmith Palais, London's big dance hall where Eric Sevareid was set up and remarked, "There was an air raid alarm, as you know, 15 minutes ago. The orchestra leader simply announced they'd go on playing as the crowd wished to stay and I don't expect more than half a dozen people have left."

Vincent Sheean was up next on that first edition of London After Dark. Sheean spoke briefly on the silent streets of Piccadilly Circus before the program went to some interviews with trainmen in Euston Station by the BBC. Finally the show wound up with J.B. Priestley in Whitehall.

When the war broke out in September 1939, Murrow stayed in London, and later provided live radio broadcasts during the height of the Blitz. Those broadcasts electrified radio audiences as news programming never had before. Previously, war coverage had mostly been provided by newspaper reports, along with newsreels seen in movie theatres; earlier radio news programs had simply featured an announcer in a studio reading wire service reports.

You burned the city of London in our houses and we felt the flames. You laid the dead of London at our doors and we knew that the dead were our dead ... were mankind's dead without rhetoric, without dramatics, without more emotion than needed be. You have destroyed the superstition that what is done beyond 3000 miles of water is not really done at all.”

Murrow's reports, especially during the Blitz, began with what became his signature opening, "This is London," delivered with his vocal emphasis on the word this, followed by the hint of a pause before the rest of the phrase. His former speech teacher, Ida Lou Anderson, suggested the opening as a more concise alternative to the one he had inherited from his predecessor at CBS Europe, Cesar Saerchinger: "Hello America. This is London calling." Murrow's phrase became synonymous with the newscaster and his network. (The emphatic this would later become a catch phrase for the network — "This...is CBS" — and for imitators, such as James Earl Jones's "This...is CNN," Ted Koppel's "This...is Nightline," and Ryan Seacrest's "This...is American Idol.")
Murrow achieved great celebrity status as a result of his war reports. They led to his second famous catch phrase. At the end of 1940, with every night's German bombing raid, Londoners who might not necessarily see each other the next morning often closed their conversations not just with "good night," but with "good night, and good luck." The future British monarch, Princess Elizabeth, said as much to the Western world in a live radio address at the end of the year, when she said "good night, and good luck to you all." So, at the end of one 1940 broadcast, Murrow ended his segment with "Good night, and good luck." Speech teacher Anderson insisted he stick with it, and another Murrow catch phrase was born. 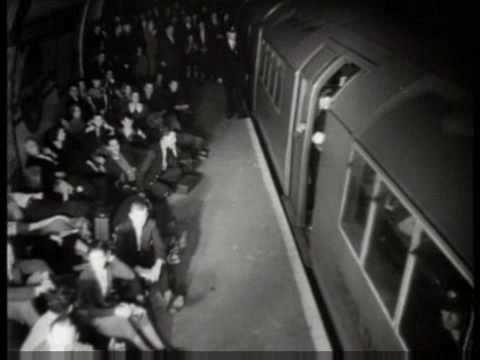