During this period, Hitler built up his forces on Germany's western frontier.

In April 1940, German forces invaded Denmark and Norway. In May 1940, Hitler's forces attacked France, conquering the Luxembourg, Netherlands and Belgium in the process. France surrendered on 22 June 1940. These victories persuaded Benito Mussolini of Italy to join the war on Hitler's side on 10 June 1940.

Britain, whose forces evacuated France by sea from Dunkirk, continued to fight alongside other British dominions in the Battle of the Atlantic. After having his overtures for peace rejected by the British, now led by Winston Churchill, Hitler ordered bombing raids on the United Kingdom. The Battle of Britain was Hitler's prelude to a planned invasion. The attacks began by pounding Royal Air Force airbases and radar stations protecting South-East England. However, the Luftwaffe failed to defeat the Royal Air Force. On 27 September 1940, the Tripartite Treaty was signed in Berlin by Saburo Kurusu of Imperial Japan, Hitler, and Ciano. The purpose of the Tripartite treaty, which was directed against an unnamed power that was clearly meant to be the United States was to deter the Americans from supporting the British. It was later expanded to include Hungary, Romania and Bulgaria. They were collectively known as the Axis Powers. By the end of October 1940, air superiority for the invasion Operation Sealion could not be assured, and Hitler ordered the bombing of British cities, including London, Plymouth, and Coventry, mostly at night.

In World War II, the Battle of France, also known as the Fall of France, was the German invasion of France and the Low Countries, executed from 10 May 1940, which ended the Phoney War. The battle consisted of two main operations. In the first, Fall Gelb (Case Yellow), German armoured units pushed through the Ardennes, to cut off and surround the Allied units that had advanced into Belgium. The British Expeditionary Force (BEF) and many French soldiers were however evacuated from Dunkirk in Operation Dynamo. In the second operation, Fall Rot (Case Red), executed from 5 June, German forces outflanked the Maginot Line to attack the larger territory of France. Italy declared war on France on 10 June. The French government fled to Bordeaux, and Paris was occupied on 14 June. The 17th of June, Pétain publicly announced France would ask for an armistice. On 22 June, an armistice was signed between France and Germany, going into effect on 25 June. For the Axis, the campaign was a spectacular victory. 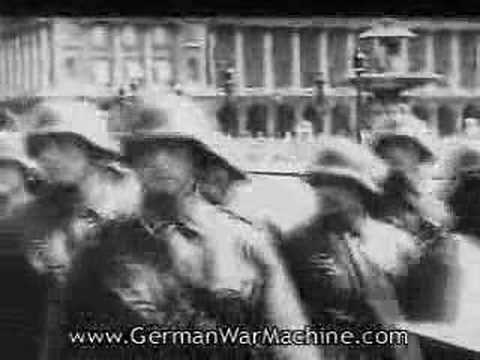