In the afternoon General Winkelman received information about armoured forces advancing in the Langstraat region, on the road between 's-Hertogenbosch and the Moerdijk bridges.

He still fostered hopes that those forces were French, but the announcement by Radio Bremen at 23:00 that German tanks had linked up with the paratroopers ended those hopes. At last he began to understand the essence of the German strategy. He now ordered the artillery batteries in the Hoekse Waard to try and destroy the Moerdijk bridges and to sent a special engineer team in Rotterdam to blow up the Willemsbrug. Pessimistic about the general Dutch situation at this point, he also ordered the vast strategic oil reserves of Royal Dutch Shell at Pernis to be set on fire. Earlier in the afternoon having been informed by Winkelman of his concerns, the Dutch government had asked Winston Churchill for three British divisions to turn the tide, but the new prime minister answered that he simply did not have any reserves; however, three British torpedo boats were sent to Lake IJssel.

The German command to the contrary, was very satisfied. It had been feared that the third day of the operation might become a "crisis day", XXVI AK having to overcome near Breda the resistance of several French and perhaps some Belgian or even British divisions. Therefore von Bock had desired to reinforce this effort with another Army Corps. When this was denied by chief of staff Franz Halder, he had arranged that at least an extra Army Corps headquarter would be formed to direct the complex strategic situation of both having to fight the Allies and advancing into the Fortress Holland over the Moerdijk bridges. As on 12 May no actual crisis seemed to materialise, von Bock decided that XXVI AK would be responsible for pursuing the French south towards Antwerp, while some forces would be directed by the new headquarters, Generalkommando XXXIX under command of General Rudolf Schmidt, advancing north with 254. ID, most of 9. PD, and SS Leibstandarte Adolf Hitler.

The paratroopers enjoyed more success in Rotterdam and areas near the critical Moerdijk bridges. Dutch troops bitterly contested Dordrecht, another critical target. After four days of fighting, the Luftwaffe bombed the center of Rotterdam to break Dutch resistance; at the same time, attempts by the Dutch to link with French troops coming from Belgium failed. The Dutch queen reluctantly evacuated to Britain along with the government, and the Dutch military was forced to cease resistance on 15 May. 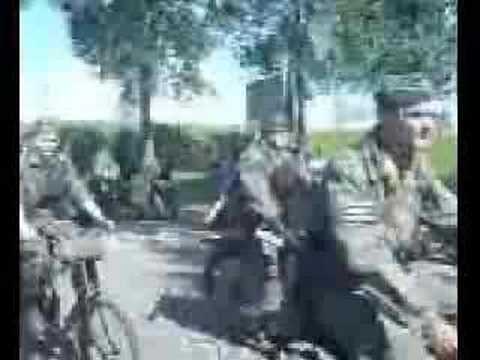