The Rhythm Club fire aka The Natchez Dance Hall Holocaust was a conflagration resulting in the death or serious injury of hundreds of people attendees who became trapped inside a one-story steel-clad wooden building in Natchez, Mississippi, United States on the night of April 23, 1940.

In the fire, two hundred nine (209) African-American party goers perished and many others were severely injured. The dance hall, which was once a church and converted blacksmith shop, was located in a one-story frame building at 1 St. Catherine Street, blocks from the city's business district. At the time, this was the second most deadly building fire in the history of the nation. It is now ranked as the seventh among the top ten (Mississippi Public Radio, April 23, 2010).

The 11:30 p.m. inferno began as members of the local Moneywasters Social Club were enjoying the song "Clarinet Lullaby", performed by Walter Barnes and His Royal Creolians orchestra from Chicago. Starting in front of the main entrance door, the fire quickly engulfed the structure due to decorative Spanish moss being draped over the rafters. Due to the dry conditions, flammable methane gas was generated from the moss and resulted in the destruction of the building within an hour.

As windows had been boarded up to prevent outsiders from viewing or listening to the music, the crowd was trapped. More than 300 people struggled to get out after the blaze began. A handful of people were able to get out the front door or through the ticket booth, while the remainder tried to press their way to the back door.

Blinding smoke made movement difficult. Many people died from smoke inhalation or by being crushed by the crowd trying to escape. Bandleader Barnes and nine members of his band were among the victims. One of the group's three survivors, drummer Walter Brown, vowed never to play again. Barnes was well regarded as a strong contemporary of both Duke Ellington and Woody Herman.

People believed the fire to be accidental, started by the careless discarding of a match. The day after the blaze five African Americans were arrested after reports they had drunkenly threatened in an argument to burn the building down. Charges against them were later dropped.

The three local funeral homes had too many bodies to handle. Many of the victims were eventually buried in mass graves. In the aftermath of the fire, citizens of Natchez raised more than $5,000 to help the local Red Cross. The city passed new fire laws to prevent the overcrowding of buildings.

Between one hundred and one hundred and fifty negroes who were attending a dance at the Rhythm Night Club on Jefferson Street near the Triangle Service Station were burned to death last night when fire swept the overcrowded dance pavillion.

The dance hall was located in a corrogated iron building that kept flames inside while the negroes tried vainly to escape through the front entrance - the only exit to the dance hall.

Walter Barnes and his Orchestra had been brought to Natchez and as a result of the special occasion the dance hall overflowed with many standing outside on the street when the fire broke out.

The dance hall was decorated with hanging moss. This caught fire at the front of the building and quickly enveloped the entire hall. The negroes made a mad dash for the front, those who were weak went down under the thundering feet of others.

Source: 'Cries of Burning Negroes Heard for Blocks, Identity of Dead Unknown Early this Morning, Many Who Escaped Given Treatment and Many May Die, Fire Caught at Front of Building to Trap Negroes.'; The Natchez Democrat, April 24, 1940 Added by: Colin Harris

As Barnes and his orchestra tried to calm the stampeding crowd by playing "Marie," the wooden walls burned; with the corrugated metal holding the flames and heat indoors, turning the Rhythm Club into something like an oven, the stench of roasting human flesh permeated the night air. The front door quickly jammed with so many patrons trying to flee at once, and the crowd moved towards the windows in the rear. Drummer Oscar Brown, who carried a hammer on the road to nail his kit to the floor, quickly pounded through the boards covering one window; many escaped through it initially, then through other windows as they were cleared. It was all over in just 15 minutes. When rescue workers got inside, they found dead and dying bodies stacked atop one another. According to the Madison Country coroner, 208 African-Americans, including ten of the twelve musicians, were dead — more of them suffocated or crushed than burned. 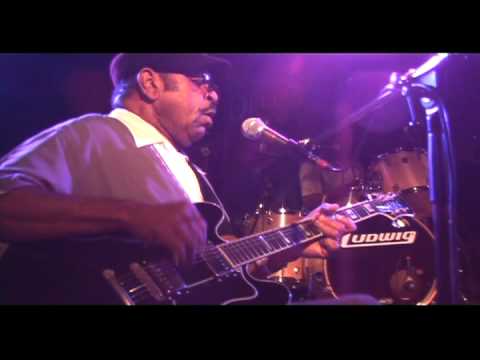