The Ford Prefect is a line of British cars produced by the UK section of the Ford Motor Company, and a more upmarket version of its direct siblings the Ford Popular and Ford Anglia.

It was introduced in 1938 and remained in production till 1941: returning to the market in 1945, it was offered till 1961. The car progressed in 1953 from its original perpendicular or 'sit-up-and-beg' style to a more modern 3-box structure.
Like its siblings, the car became a popular basis for a hot rod especially in Britain where both its lightweight structure and its four cylinder engines appealed to builders.

The Ford Prefect was introduced in 1938 and built by the Ford plant in Dagenham, Essex. The original Ford Prefect was a slight reworking of the previous year's 7Y, the first Ford car designed outside of Detroit, Michigan. It was designed specifically for the British market. It had a 1200 cc side valve engine with thermocirculation radiator (no pump) and the ability to be started by a crank handle should the battery not have sufficient power to turn the starter motor running from the 6 Volt charging system. The windscreen wipers were powered by the vacuum ported from the engine intake manifold - as the car laboured uphill the wipers would slow to a standstill due to the intake manifold vacuum dropping to near nil, only to start working again as the top was reached and the intake vacuum increased. The windscreen opened forward pivoting on hinges on the top edge; two flaps either side of the scuttle also let air into the car.
The most common body styles were two and four door saloons but pre war a few tourers and coupés were made. Post war only four door saloons were available on the home market but two door models were made for export.
41,486 were made up to 1941 and a further 158,007 between 1945 and 1948.

Post war, the Prefect design changed little until replaced in 1952. The headlamps moved into the wings and trafficators were fitted (internally lit semaphores springing out from the door pillars to signal left and right turns), though due to space restrictions these were left out on the Australian-built Ute. Only four door saloons were available on the home market, the two door sector being left to the Anglia but some were made for export.
The brakes remained mechanically operated using the Girling rod system with 10 in (250 mm) drums and the chassis still had transverse leaf springs front and rear.
A Prefect tested by the British magazine The Motor in 1948 had a top speed of 61 mph (98 km/h) and could accelerate from 0-50 mph (80 km/h) in 22.8 seconds. A fuel consumption of 33.2 miles per imperial gallon (8.51 L/100 km; 27.6 mpg-US) was recorded. The test car which had the optional leather upholstery cost £412 including taxes. In standard form they commented that it was the cheapest 4-door car on the British market.
192,229 were made.

The Prefect was first introduced in 1938 and built by Ford at Dagenham.

In 1953 the transition to modern motoring was made when a much redesigned Ford Prefect was introduced alongside the similarly styled Ford Anglia and it remained in production until 1959.

In addition to the UK, Ford Prefects were also sold in Australia and Canada.

It was also built under licence in Latvia by Ford-Vairogs as the Ford-Vairogs Junior. The Prefect also became a TV star in a situation light years away from a car advert.

In Douglas Adams's science fiction/comedy series The Hitchhiker's Guide to the Galaxy, one of the characters is an alien who adopted the name "Ford Prefect" while visiting Earth, believing that the name would be "nicely inconspicuous": He believed that automobiles were the dominant species on Earth, as a result of lazy research on his part.

This joke was completely lost on the American audience due to them having never heard of the Ford Prefect.

In the 2005 film adaptation, the character was nearly run over by a real Ford Prefect.

But when I first became hooked on cars around 1954, the Prefect caught my eye as a thoroughly modern and attractive car.

However it was soon eclipsed in my eyes by the Ford Zodiac and the angular restyled Anglia of the early 60s. 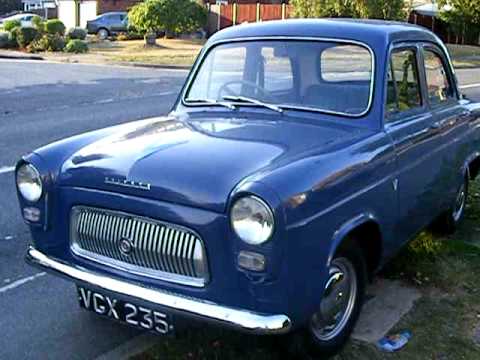 View other events that happened in 1938