Alexander Nevsky (Russian: Александр Невский) is a 1938 historical drama film directed by Sergei Eisenstein, in association with Dmitri Vasilyev and a script co-written with Pyotr Pavlenko, who were assigned to insure Eisenstein did not stray into "formalism" and to facilitate shooting on a reasonable timetable. It was produced by Goskino via the Mosfilm production unit, with Nikolai Cherkasov in the title role and a musical score by Sergei Prokofiev, Alexander Nevsky was most popular of Eisenstein's three sound films. In 1941 Eisenstein, Pavlenko, Cherkasov and Abrikosov were awarded the Stalin Prize for the film.

Like many of Eisenstein's best films, Alexander Nevsky was conceived as a morale-booster, aimed at stirring up Russian patriotism. It is set in the 13th century, but the villainous Teutonic Knights are obviously meant to represent the burgeoning threat of Hitler's hordes. With Russia besieged by both these knights and by the Tartars, only a charismatic leader can save the populace from these barbaric baby killers (yes, we see the villains tossing screaming infants into bonfires!) The hero of the piece is the legendary Prince Alexander Nevsky, portrayed by Nikolai Cherkasov, who bears a striking resemblance to Gary Cooper. The saving turnaround for Nevsky is the battle of ice-covered Lake Peipus in 1242. This bravura sequence is staged in spectacular fashion, underlined by the specially-commissioned music of Sergei Prokofiev. ~ Hal Erickson, All Movie Guide 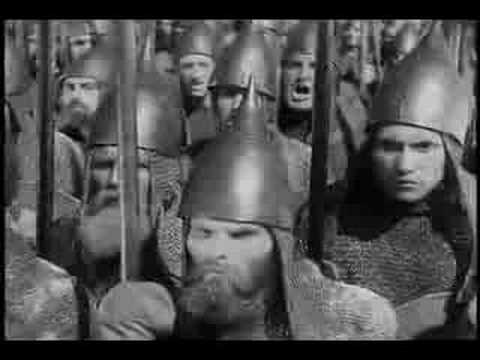