The Mercedes-Benz W125 was a Grand Prix racing car designed by Rudolf Uhlenhaut to race during the 1937 Grand Prix season.

Due to the uncompetitiveness of their W25 car, Mercedes pulled out of the 1936 Grand Prix Season midway through the year in order to concentrate on designing a car that would see them return to the top of the rankings. A new racing department ('Rennabteilung') was set up within Mercedes-Benz in order to work on the car. Rudolf Uhlenhaut, previously a production car engineer for the company, was selected to lead the design team. Uhlenhaut had not previously designed a racing car, but had significant experience testing road cars on the Nürburgring race track, experience which allowed him to adapt his knowledge relatively easily to race cars.
When testing the old W25 car, Uhlenhaut remarked that the suspension was too stiff, preventing the wheels from following the road. During the test session, a wheel came off the car, yet Uhlenhaut continued to drive the car as if nothing had happened. This stiffness caused the chassis to flex and the rear axle to bend by up to 7-10 cm (3-4 inches) under braking. The brief for the new car included a stiffer chassis and more travel on the suspension to avoid the problems experienced in the 1936 car.

The W125 had a much stiffer tubular frame construction compared to the previous W25 model. This was achieved using oval tubes made of nickel-chrome molybdenum which flexed considerably less than the steel frame used in the W25.
The bodywork of the W125 was aluminium metal, which like its predecessor was left unpainted in its bare silver colour. This brought Mercedes' cars during this period (and rivals Auto Union, whose cars were the same colour) the nickname of Silver Arrows.

With no regulations limiting engine size, other than the 750 kg total car weight limit, Mercedes designed a 5.6 litre engine configured with eight inline cylinders and an overhead camshaft for the W125. Named the M125, the engine was also fitted with a Roots type supercharger producing 632 lb·ft (857 N·m) of torque at the start of the season. The engines built varied in power, attaining an output between 560 and 595 horse power (418-444 kW) at 5800 rpm. Fuel used was a custom mix of 40% methyl alcohol, 32% benzene, 24% ethyl alcohol and 4% gasoline light. The engine weighed 222 kg (490 lbs) - approximately 30% of the total weight of the car, and was mounted in the front of the car.
Like its W25 predecessor, the W125 used a 4-speed manual transmission. The gearbox design was changed to a constant mesh type, which provided better reliability compared to the unsynchronized transmission of the M25. In a constant mesh gearbox, the transmission gears are always in mesh and rotating, but the gears are not rigidly connected to the shafts on which they rotate. Instead, the gears can freely rotate or be locked to the shaft on which they are carried. The previous unsynchronised transmission required the gears to be spinning at roughly the same speed when engaged; otherwise, the teeth would refuse to mesh.

The W125 made its first competitive outing in May at the 1937 Tripoli Grand Prix with Mercedes-Benz entering four cars. German Hermann Lang won his first Grand Prix motor race to give the W125 a victory on its début and provide Mercedes with their first victory over rivals Auto Union since May 1936. The next race was held at the AVUS motor-racing circuit in Germany, a 12-mile (19 km) long circuit consisting of two long straights of approximately 6 miles (10 km) length joined at either end by a curve. As such, it was possible for a car to reach its top speed. Mercedes entered two W125 cars, a streamliner which was modified from the original design to increase its top speed on the straights and a standard car driven by Richard Seaman in case of problems with the streamliner. The streamliner had a top speed 25 km/h (16 mph) faster than the regular car. On lap three of the race, the streamliner retired while leading due to a gearbox failure. Seaman's regular W125 finished in fifth position.

At the Eifelrennen held at the Nürburgring circuit, Mercedes entered five W125's, including one driven by Christian Kautz fitted with the new suction carburettor supercharger system. Kautz finished in ninth, while team-mates Rudolf Caracciola and Manfred von Brauchitsch finished in second and third places. For the next race, Mercedes split their entries between two races which occurred within a week of another. Two cars were sent to the USA to compete in the Vanderbilt Cup, one of which was fitted with the suction carburettor supercharger used on Kautz's car, and three cars went to Belgium to compete in the first round of the 1937 European Championship. Richard Seaman finished second in the Vanderbilt, and third and fourth place were achieved in the Belgian Grand Prix. Following Seaman's success in the Vanderbilt with the new supercharger system, it was fitted to all of the W125s.
The following two races were also both part of the European Championship. The next round in Germany saw both Mercedes and rivals Auto Union competing on home soil. Mercedes triumphed, as Rudolf Caracciola took his first victory of the year and Manfred von Brauchitsch followed him home in second position. In the next round at Monaco, the positions were reversed as von Brauchitsch won and Caracciola finished in second. A third Mercedes W125, driven by Christian Kautz, took third place.
The non-championship Coppa Acerbo in Italy was the next event the W125 entered. During practice Richard Seaman crashed into a house and destroyed his car. Therefore only von Brauchitsch and Caracciola started the race. During the race, Seaman took over from Caracciola and despite an engine fire, he finished the race fifth. von Brauchitsch fared better finishing in second position. The Swiss Grand Prix was the penultimate round of the 1937 European Championship. Like in Monaco, Mercedes W125s finished in the top three places, Caracciola taking the win with Hermann Lang in second and von Brauchitsch third. The final round of the championship marked a return to Italy, where at the Livorno Circuit, Caracciola held off team-mate Lang to win the race by 0.4 seconds and become European Champion. von Brauchitsch retired from the race and took second place overall in the Championship. Kautz and Lang took third and fourth places meaning Mercedes drivers occupied the top four positions in the championship table.
The W125 entered into two non-championship events before the end of the season. The Masaryk Grand Prix in Czechoslovakia gave the W125 its final victory when Caracciola won the race, von Brauchitsch finished second and Seaman came in third. The race was marred as Hermann Lang had crashed into spectators on lap five, resulting in twelve injuries and two deaths.

Manfred Von Brauchitsch driving the W125 at the 1937 Donington Grand Prix
The final competitive race Mercedes entered the W125 into was the 1937 Donington Grand Prix. Rosemeyer prevailed, von Brauchitsch finished in second place and Caracciola in third while both of the other W125s failed to finish. The British ERA were outclassed, failing to get classified in their home race.

1938 saw changes in the rules, with the maximum limit on weight being replaced with a maximum limit on engine capacity and a minimum weight for the car being introduced. As such the W125 would not be eligible for entry without heavy modifications. Instead, Mercedes-Benz developed a new car, the Mercedes-Benz W154, and the W125 was withdrawn from racing.

The W125 served as a replacement to the highly sucessfull W25 and the last Mercedes-Benz to comply with 750 kg formula regulations. Design elements were largely affected by the formula race regulations at the time. During the years of 1934, 35, 36 & 37 there were no rules governing the size and aspiration of engines. This allowed for cars of extreme power and speed to race during that era. In 1937 the only primary limit imposed on the teams was a maximum weight of 850kgs. This was rasied from the 750kgs imposed in the previous 1936 season.

The W125 backbone consisted of an extremely sturdy, tubular oval frame made from special steel, with four cross members. It benefited from tests with production car frames as, for instance, the one used on the 1938 generation of the Mercedes-Benz 230. The wheels were located differently, by double wishbones and coil springs at the front, as on the celebrated, noble 500 K and 540 K models, and by a double-joint De Dion rear axle which ensured constant camber, plus longitudinally installed torsion bar springs and lever-type shock absorbers. Lateral links transferred thrust and brake moments to the chassis.

After extensive tests on the Nürburgring, the engineer Rudolf Uhlenhaut came up with a revolutionary suspension configuration: setting a precedent for later Grand Prix car designers, Uhlenhaut just reversed the basic suspension set-up used until then, stiff springing but little damping: the W 125 had soft springs with long spring travel and stiff dampers and thus served as a role model for all modern Mercedes-Benz sports cars. Its outer appearance resembled its predecessor's, unmistakable all the same by the three cooling air inlets. For the ultra-fast Avus race on 30 May 1937 (Hermann Lang achieved an average speed of 261.7 km/h), it was kitted out with a streamlined body. The transmission and differential formed an integrated unit. The car's eight-cylinder in-line engine represented the highest evolutionary stage of the Grand Prix machine used since 1934. The supercharger was positioned behind the carburettors and thus supplied with the mixture itself – a first with Mercedes-Benz racing cars.

Although the W 125 served its fast purpose for one year only, it did so with great variability. It could precisely be adjusted to the respective racetrack by means of different transmissions, tank volumes and petrol cocktails, carburettors, superchargers, rim and tire sizes, tire treads and even exterior dimensions. Engine power, torque, top speed and the speeds achieved in the individual gears varied accordingly. As many as eight different transmission ratios were available, for instance, plus two rear-wheel sizes (7.00-19 and 7.00-22). An output of 592 hp (435 kW) at 5800 rpm quoted by the factory refers to the Gran Premio d'Italia in Livorno on 12 September 1937. The engine, which had arrived at a capacity of 5660 cc in the meantime, devoured one litre per kilometre, an aggressive special mixture made up of 88 percent methanol, 8.8 percent acetone and traces of other substances. Ready to race, the W 125 weighed 1097 kilograms (1021 kilograms without driver) in that configuration, including 240 litres of petrol, seven litres of water, nine litres of engine oil and 3.5 litres of transmission oil. The Untertürkheim engineers evoked up to 646 hp (475 kW) from the 222-kilogram engine on the test bench, corresponding to a massive power-to-swept-volume ratio of 114 hp (84 kW) and an equally astounding power-to-weight ratio of 1.16 kilograms per horsepower. Those were values that were surpassed only decades later, just like Hermann Lang's average speed of 261.7 km/h in that year's Avus race. 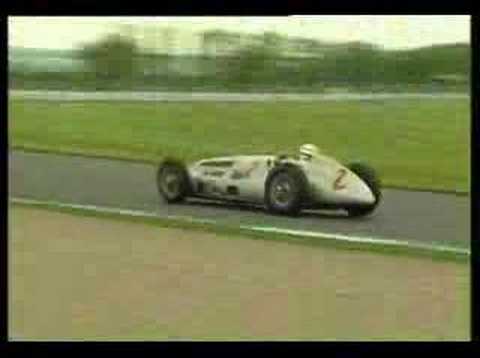