In 1936, Owens arrived in Berlin to compete for the United States in the Summer Olympics.

Adolf Hitler was using the games to show the world a resurgent Nazi Germany. He and other government officials had high hopes German athletes would dominate the games with victories (the German athletes achieved a top of the table medal haul). Meanwhile, Nazi propaganda promoted concepts of "Aryan racial superiority" and depicted ethnic Africans as inferior. Owens surprised many and showed the fallacies of racial supremacy by winning four gold medals: On August 3, 1936 he won the 100m sprint, defeating Ralph Metcalfe; on August 4, the long jump (later crediting friendly and helpful advice from Luz Long, the German competitor he ultimately defeated); on August 5, the 200m sprint; and, after he was added to the 4 x 100 m relay team, his fourth on August 9 (a performance not equaled until Carl Lewis won gold medals in the same events at the 1984 Summer Olympics).

Just before the competitions Owens was visited in the Olympic village by Adi Dassler, the founder of Adidas. He persuaded Owens to use Adidas shoes and it was the first sponsorship for a male African-American athlete.

The long jump victory is documented, along with many other 1936 events, in the 1938 film Olympia by Leni Riefenstahl.

On the first day, Hitler shook hands only with the German victors and then left the stadium. Olympic committee officials then insisted Hitler greet each and every medalist or none at all. Hitler opted for the latter and skipped all further medal presentations. On reports that Hitler had deliberately avoided acknowledging his victories, and had refused to shake his hand, Owens recounted:

"When I passed the Chancellor he arose, waved his hand at me, and I waved back at him. I think the writers showed bad taste in criticizing the man of the hour in Germany.""

He also stated: "Hitler didn't snub me—it was FDR who snubbed me. The president didn't even send me a telegram." Jesse Owens was never invited to the White House nor bestowed any honors by Presidents Franklin D. Roosevelt (FDR) or Harry S. Truman during their terms. In 1955, President Dwight D. Eisenhower acknowledged Owens's accomplishments, naming him an "Ambassador of Sports."

Hitler's contempt for Owens and for those races he deemed 'inferior' arose in private, away from maintaining Olympic neutrality. As Albert Speer, Hitler's architect and later war armaments minister recollected in his memoirs Inside the Third Reich:

"Each of the German victories and there were a surprising number of these made him happy, but he was highly annoyed by the series of triumphs by the marvelous colored American runner, Jesse Owens. People whose antecedents came from the jungle were primitive, Hitler said with a shrug; their physiques were stronger than those of civilized whites and hence should be excluded from future games.

Despite Hitler's feelings, Owens was cheered enthusiastically by 110,000 people in Berlin's Olympic Stadium and later ordinary Germans sought his autograph when they saw him in the streets. Owens was allowed to travel with and stay in the same hotels as whites, an irony at the time given that blacks in the United States were denied equal rights. After a New York ticker-tape parade in his honor, Owens had to ride the freight elevator to attend his own reception at the Waldorf-Astoria.

It was the summer of 1936 and Nazism was running rampant throughout pre-World War II Eastern Europe. The Olympics were coming to Berlin and Adolf Hitler viewed it as a golden opportunity to showcase his country and prove to the rest of the world that his Aryan race was superior. Not so fast, Adolf.

Twenty-two-year-old American Jesse Owens didn't care much for Hitler's politics—or any politics for that matter. He just wanted to show off his immense skills and represent his country to the best of his abilities. Just over a year earlier, on May 25, 1935, Owens recorded one of the more mind-boggling performances in track and field history. He broke three world records and tied another at the Big Ten Track and Field Championships in Michigan—in just 45 minutes!

Hitler viewed African-Americans as inferior and chastised the United States for stooping to use these "non-humans." Despite the endless racial epithets and the constant presence of the red and black swastika, Owens made Hitler eat his words with four gold medals.
Owens Hits Gold

The first gold was in the 100 meters, where Owens edged out teammate Ralph Metcalfe in a time of 10.3 seconds.

Gold number two came in the long jump, where he fouled on his first two attempts. One was just a practice run where he continued down the runway into the pit, but German officials didn't buy it and counted it as a jump. Top German long jumper Luz Long suggested Owens play it safe and jump a few inches before the usual take-off spot. He took his advice and qualified for the finals, where he won the gold with a leap of 26—5½. And Long was there to congratulate him. "It took a lot of courage for him to befriend me in front of Hitler," Owens would later say. "You can melt down all the medals and cups I have and they wouldn't be a plating on the 24-karat friendship I felt for Luz Long at that moment."

The third gold was in the 200-meter dash, where he defeated, among others, Jackie Robinson's older brother Mack and broke the Olympic record with a time of 20.7 seconds.

Gold number four was a controversial one—not with the Germans, but with his fellow Americans. American Jews Marty Glickman and Sam Stoller were supposed to run for the United States on the 4x100 relay team. At the last minute, they were replaced by Owens and Metcalfe and it was reported that Hitler asked U.S. officials not to embarrass him any further by having two Jews win gold in Berlin. Whether that's true or not, the Owens-led U.S. team rolled to victory in a world record time of 39.8 seconds and Owens' magical Olympics came to a close.

While German officials denounced Owens, an overwhelming majority of the German fans treated him like a hero. In 1984, a street in Berlin was named in his honor.

The Berlin Olympics of 1936 were held in Adolf Hitler's Nazi Germany, and Hitler's Nazi Party used the event as a soapbox to promulgate the theory of "Aryan" racial superiority. Hitler was spectacularly shown up by Jesse Owens and other African American athletes, members of a so-called "inferior" race. Despite the hostile atmosphere, Owens triumphed in the 100-meter dash, the 200-meter dash and the broad jump. He replaced a Jewish-American member of the 400-meter relay team that went on to win the Gold Medal. In three of his events, Owens -- who became the first American in the history of track and field to win four gold medals in a single Olympics, a feat not duplicated until 1984, when Carl Lewis won gold medals in the same events at the Warsaw Pact nations-free 1984 Summer Olympics) -- established Olympic records. Although Hitler did not shake his hand, by the end of the games, the German fans cheered for him. In fact, in his 1970 autobiography "The Jesse Owens Story", Owens claimed that the Fuhrer himself waved to him. 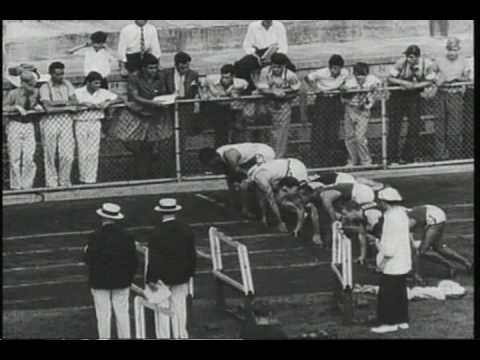